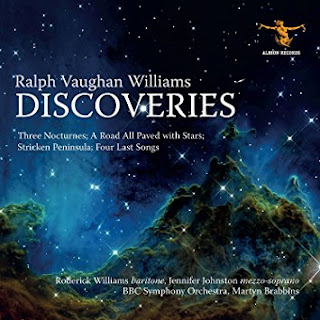 It is hard to imagine a 20th century English classical scene without Vaughan Williams. He gave us a music of beauty and power that was a huge part of what made the English rebirth possible. Symphonies, operas, tone poems, his output remains a joy to those who have delved into the music wholeheartedly.

And with the advent of the label Albion, an offshoot of the Ralph Vaughan Williams Society, we get to hear music that for whatever reason did not enjoy wide distribution until now. Discoveries (Albion 028) is one of the latest and best of their releases. We have the chance to hear the BBC Symphony Orchestra and soloists in a program of tone poems, songs and film music that until now have been all-but forgotten, yet turn out to be vintage Vaughan Williams.

The "Three Nocturnes for Baritone and Orchestra" is an early work dating from 1908, when Ralph was studying with Ravel. One of the three movements was orchestrated; the other two have been orchestrated by Anthony Payne. The setting of Walt Whitman's poetry is something Vaughan Williams did a number of times in his lifetime. Here is a first go with a impressionism and harmonic palette similar to his "Riders to the Sea," among others. It is a hauntingly memorable work. The middle movement was long missing. This is the first recording of all three movements. Baritone Roderick Williams does a great job here.

"A Road All Paved with Stars - A Symphonic Rhapsody from the Opera The Poisoned Kiss"  (1936) is an arrangement of some of the high musical points in the opera by Adrian Williams. It is very lyrical and impassioned, nicely capturing the Vaughan Williams of that time.

"Stricken Peninsula - An Italian Rhapsody for Orchestra" was originally a film score for a short army propaganda movie about Italian reconstruction at the end of WWII. The score was lost but Philip Lane has transcribed it and rearranged it into a suite. It makes for worthwhile hearing, though perhaps not entirely earth shattering. Still, it is something worth hearing.

"Four Last Songs for Mezzo-Soprano and Orchestra" were written to the poetry of his wife Ursula, Only one was performed during Ralph's lifetime. They were originally conceived for voice and piano. In Anthony Payne's orchestration they become a thing of mysterious contemplation. Jennifer Johnston sings them with great artistry.

This is music any lover of Vaughan Williams will welcome and appreciate. It is seminal collection of worthwhile obscurities that I recommend without reservation. Thank you, Albion!