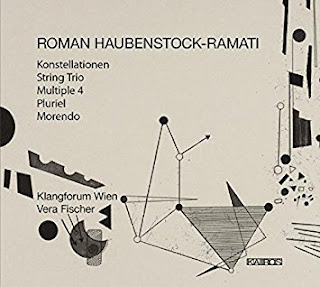 In any innovative period there are voices thought important to the time yet whose reputation goes into eclipse following his or her death. Roman Haubenstock-Ramati (1919-1994) follows that trajectory. He shared the stage and recordings with the prominent serialists-high modernists of the day, Boulez, Stockhausen, etc. And his music ultimately came out of Webern, a factor in common with the Darmstadt school.

His music has not been heard all that much in recent years. Yet as the new album  Konstellationem (Kairos 0015003) makes clear, it has a vibrancy of sound color, a fragility and structural distinctness that is all his own.

The Trio gives us the first appearance of his idea of repetition and variation, already moving away somewhat from the dodecaphonic style so important to classic serialism. As we follow his music graphic notation increasingly holds sway, to introduce an aleatoric element and ultimately to create musical structure as if in a mobile. The musical content is mapped out in the scores, but timing and concordance/coincidance is left up to the players in accordance with the graphic representations in the score. Later works return to conventional notation but not without reflecting on the insights gained from the middle period.

A central work of his middle period and important enough to appear in three different versions on this album is the Konstellationem (1971), made up of 25 colored etchings featuring recurring yet differing series of markings meant to be realized by the ensemble in varying yet open ways.

The chamber group Klangforum Wien and flutist Vera Fischer give us this fascinating retrospective with fully focused detail and imagination, a labor of love. We are beckoned into Haubenstock-Ramati's special sound worlds with careful and sensitive realizations of a full spectrum of works.

It is a new look at a composer who genuinely deserves our attention and respect. No follower of high modernism can afford to do without this release. It is as seminal as it is fascinating. Highly recommended.