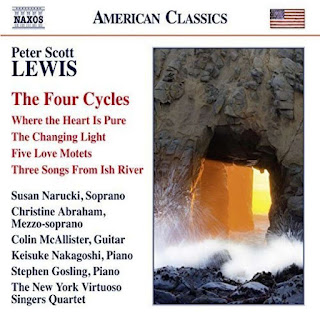 American composer Peter Scott Lewis (b. 1953) is a masterful creator of song cycles, as we readily hear in his recent offering The Four Cycles (Naxos 8.559815), which includes his complete vocal music to date. He is both modern and expressive at the same time, capable of writing in a harmonically ultra-advanced, edgy tonality or at times staying closer to a key center, his piano parts sometimes complicated, moving especially in the case of "Where the Heart is Pure (Duo Version)" (1993/2013) where Christine Abraham's  mezzo-soprano has a massive impact that the piano part (Keisuki Nakagoshi) makes tangible and modern-dramatic.

"The Changing Light" (2013) and "Five Love Motets" (2014) are scored for The New York Virtuoso Singers Quartet and, for the first of these cycles,  piano (Stephen Gosling). They are beautifully conceived and performed, with a four-part counterpart-homophony that stands out as constituting some of the most accomplished chamber vocal music of our times. There is a sure hand at work and results that tintinnabulate in the ear with irresistible heft and charm.

This is "pure" vocal music in an international modern style. There are no obvious vernacular touches but instead a play on consonance and dissonance, almost hearkening back to the Viennese School but ultimately original and captivating in its own right.

It's a surprise and will be a joy for all attracted to the modern-day extensions of the lieder.