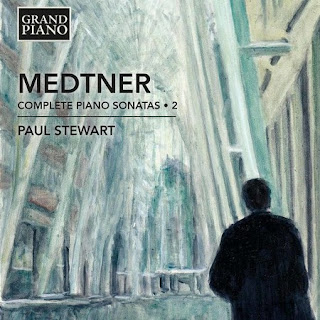 Russian composer Nicolay Medtner (1880-1951), so the liner notes to his Complete Piano Sonatas 2 (Grand Piano 618) tell us, is more important, much more so than his reception in the West has recognized. Indeed, so the notes say, the "14 piano sonatas are considered among the most significant achievement[s] in this genre by any composer since Beethoven." Perhaps partly because the second volume contains only three sonatas, and mostly earlier ones, my ears have not quite confirmed this level of excellence as of yet.

The "Sonata-Idyll in G Major, Op. 56" (1935-37) is most striking, for sure, a kind of link between Tchaikovsky and Prokofiev or Shostakovich. And the final movement of "Sonata-Szazka in C Minor, Op. 25" (1910-11) is rather profound. The rest of that sonata and the "Sonata-Triad, Op. 11" (1904-08) strike me as very inventive, but rather what one might expect of a late romantic Russian composer of genuine talent, not quite at the level of a Beethoven.

These sorts of comparisons by rank may not be entirely necessary in the end. We listen and get what we will out of any work. If the volume 2 of complete Medtner sonatas in the end does not bear comparison to Beethoven to my mind, it does tell me that he belongs in the highest ranks of 20th century Russian composers for the piano. The music is highly lyrical, not at all modernistic in the widest sense, but very idiomatically pianistic and delightful to hear.

Paul Stewart has a poetic sensibility that seems perfect for these works. His technique, though considerable, is not worn on his sleeve but instead directed toward the most musical of readings. I recommend this volume to you and look forward to new installments. Medtner is Medtner and how ever that stacks up, this is very worthwhile piano music.
Posted by Grego Applegate Edwards at 12:44 PM