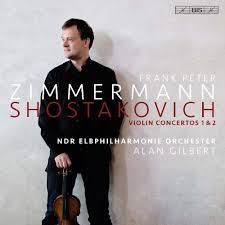 Some or many of the greatest composers, modern or otherwise, have left us a legacy via a significant body of works, numerous enough that it takes considerable time to absorb and digest the sum total of their creative career. With others there may be less  for whatever reason. Dmitri Shostakovich is a composer of the former type. He left for us a daunting corpus of symphonies, operas, string quartets and other chamber works, solo piano works and concertos. Getting to know well the salient features of his output can take a lifetime.

His Violin Concertos 1 & 2 (BIS 2247), now in a new recording by violin master Frank Peter Zimmermann along with the NDR Elbphilharmonie Orchester under Alan Gilbert, are some of the must-know works.  The moodiness of the first contrasts with the section devoted to a frenzied Jewish folk dance. Zimmermann gives us an appropriately striking contrast between the two moods which are seconded in the orchestral parts, played with a zeal that matches the solo line. This version gives us an especially good bead on the frenzy, the best I've heard.

The second concerto is filled with adagios of great beauty and a less frenetic Allegro finale. And once again Zimmermann and company are up to the challenge.

In both concertos the cadenzas are spectacular in Zimmermann's hands.

All in all great works in high definition sound, played with definitive gusto and depth of feeling. If you don't have these concertos this is a version I'd definitely recommend. Those who are devoted to these concertos will also benefit much from these ultra-contemporary readings. Zimmermann has an unsentimental and very kinetic approach that Gilbert reinforces for some pretty extraordinarily moving and exciting fare.

Strongly recommended.
Posted by Grego Applegate Edwards at 6:10 AM