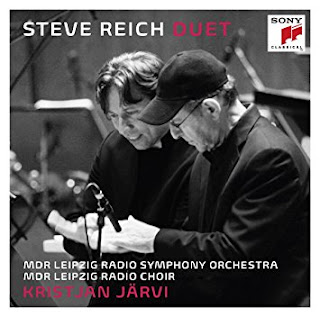 To celebrate Steve Reich's 80th birthday year there have been a number of important releases. I covered the ECM set a while back and today we consider another, Kristjan Jarvi and the MDR Leipzig Radio Symphony Orchestra and Choir in a 2-CD set simply titled Duet (Sony Classics 88985366362). Whereas the ECM set covered the breakthrough classics in a reissue of the original versions, Duet presents some later gems for orchestra and orchestra and chorus in brand new versions.

Most important are the world premiere orchestral versions of "Daniel (Variations)" and "You Are (Variations)," two stunning works that manage to take further the interlocking pulsations of "Music for 18 Musicans," the choral polyphonic extensions of "Tehillim" and the string writing of "Four Sections."

An excellent version of the latter is included in the set, along with the short but captivating "Duet for Two Violins and String Orchestra." As a kind of bonus, Steve and Kristjan give us a rousing version of the earlier "Clapping Music."

This set does for Reich's later orchestral period what the ECM set does for the breakthrough middle period, only Jarvi's versions of the works are newly minted. They are as near definitive in their own way as those ECM versions were for the older music.

This set evokes a world where Reich's post-modern rhythmic lyricism is a mature entity of supreme originality and extraordinary power. It is OUR world, a testament to the seminal importance of Reich's compositional mastery.