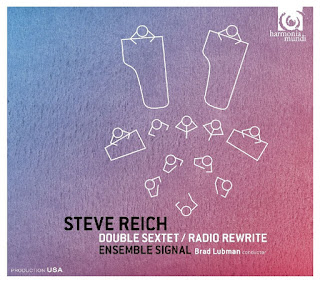 Ensemble Signal and conductor Brad Lubman are very much in their element for both works. They relish the driving pulsations and pronounced accentuations of the works to give us a fully satisfying take on these gems.

As usual Reich never allows himself a banal phrase in these, and at the same time every phrase bears the stamp of his original musical identity. As always, a superior inventive brilliance distinguishes Reich from some of his colleagues and imitators. These infectiously joyful performances are a timely reminder of just why he is the most important of the so-called minimalists. Happy birthday Maestro Reich!
Posted by Grego Applegate Edwards at 5:12 AM