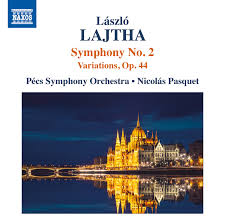 Laszlo Lajtha (1892-1963)? A leading Hungarian composer from the first half of the 20th century. All is the pity that many of us in the States do not know his music well. His nine symphonies and numerous string quartets are what he is most remembered for, apparently. Marco Polo released the complete cycle of symphonies with the Pecs Symphony Orchestra under Nicolas Pasquet in the '90s. They are being re-released by Naxos. Symphony No. 2 (Naxos 8.573644) has recently come out and I have been listening.

The Second is a monumentally dark, brooding symphony Lajtha wrote in 1938. It is a full-blown work, played with spirit by the Pecs Orchestra. I find myself increasingly drawn toward its modernist, Hungarian musical ethos.

Also included is the "Variations, Op. 44" (1948), the second of three works originally composed for Hillering's film version of Elliot's Murder in the Cathedral. It is notable for its long, sprawling symphonic thematics.

Is this a good introduction to Lajtha? No doubt the complete symphonic cycle is that. There is a singularity of the music on this volume and so it serves to wet one's whistle, nicely, and sets one up with expectations for the later works. And so it is worthwhile.
Posted by Grego Applegate Edwards at 5:10 AM