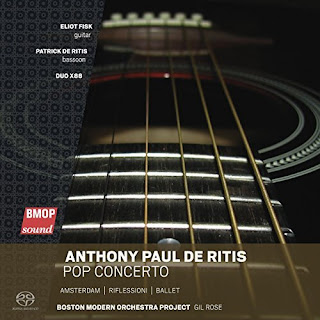 The spectrum of styles to be had in the hands of talented present-day composers is pretty vast. Anthony Paul de Ritis exemplifies a modern tonal postmodernism, inventive well orchestrated music we can hear productively in his recent release Pop Concerto (BMOP Sound 1051). It consists of his "Pop Concerto for Guitar and Orchestra" (2014) plus three additional works, as played with relish and verve by the Boston Modern Orchestra Project under Gil Rose.

This is music minus the usual repetition of minimalism, yet there still is a working through of motives and a sort of variational lucidity that moves away from rapid looping and regains horizontal developmental trajectories in keeping with modern tonal stances. There is ever a rhythmic vitality to this music, a factor that gives it all a very contemporary edge and alludes in part to rock-pop forms.

That is most pronounced, understandably, in the title work "Pop Concerto for Guitar and Orchestra" featuring Eliot Fisk on acoustic guitar. The music in each of the four movements is based foundationally around a rock-pop song of note. Namely "Bring it On" by Seal, Alanis Morissette's "You Oughta Know," "Beautiful Day" by U2, and "The Way You Make Me Feel" by Michael Jackson. The key to the success aesthetically of this concerto is the reworking of the song material and the inventive quality of the solo guitar part. The final results are far more than a simple arranging of song material to fit an orchestral-guitar solo idiom. There is on display a thorough conceptual rigor and flow that brings it above an arrangement and into new compositional territory.

The bonus works extended our appreciation of the composer's originality. "Amsterdam" (2004) is a tour de force showpiece for orchestra that reminds of Michael Torke's orchestral work, gives us a kind of modern-day equivalent and springboarding off of Aaron Copland, yet makes strides in an original direction.

"Riflessioni" (2014) enters more complex labyrinthian depths of orchestral complexity with mysterioso darkness and heightened expressionist syntax for both solo bassoon (Patrick de Ritis) and full ensemble. It is the more modernist of the works to be heard in the program, and perhaps a bit more esoteric-serious-moody than the others.

Finally there is "Ballet" (1997/2013) featuring the two piano Duo X88 (Vicky Chow and Saskia Lankhoorn), a substantial 20-minute work. It is slightly more "radically tonal" perhaps than the others, with a forward momentum like "Amsterdam" yet also a sort of quasi-pentatonic-modal cascading flow running parallel inside of the rhythm..

de Ritis leaves me with a firm conviction that he has managed to come up with a new synthesis that is original and definable in personal terms. It is well healed, sonically mapped music with much to recommend it.

I strongly favor this one.