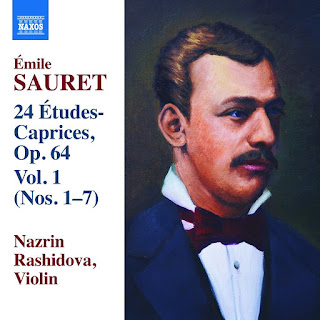 Of the sum of unaccompanied solo violin works, those of Emile Sauret (1854-1920) are among the lesser known to the layman appreciator.  He was one of the greatest and most renowned violin virtuoso of his time. He left behind a Violin Concerto, some character pieces and some technical exercises, the most involved musically of which are the 24 Etudes-Caprices, Op. 64. Nazrin Rashidova apparently is in the process of recording them all. The first volume, covering Nos. 1-7, has recently appeared (Naxos 8.573704).

These are alternately highly demanding, then highly lyrical rhapsodic works, owing as much or more to the tradition of a Paganini as to a Bach. They are in all 24 keys, Nazrin Rashidova tackles them with heroic passion and exactitude, with a beautiful tone and satisfying idiomatic flare.

The Etudes-Caprices were published in 1902  They were dedicated to Sauret's violin student Marjorie Hayward, who had studied with him since she was 12 years old and was only 17 at the time of its publication. The pieces show no doubt his appreciation of her potential through the care that is put into each exercise.

Needless to say these are much more than mere pedagogic vehicles. There is a complexity and expressive beauty to these Etudes that make them excellent listening some 115 years later.

Ms. Rashidova brings us a ravishing interpretation for a most enjoyable program. Recommended.
Posted by Grego Applegate Edwards at 5:30 AM