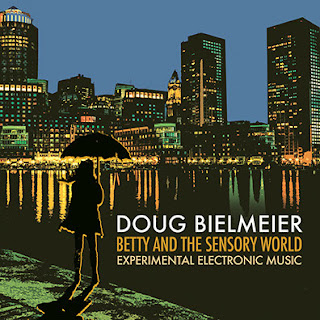 The world of electronic/electroacoustic music these days is open-ended and vast in possibilities. One of the most striking recent examples comes from US composer Doug Bielmeier. Betty and the Sensory World (Ravello 7972) is a set of seven interrelated movements that play upon the richly expressive sonic worlds of drone and harmonic overtone timbers that have an extraordinary beauty, a hugely ambient, ever shifting expressive, hypnotic quality.

If my listening mind recalls the organic unity of some of Iannis Xenakis' electroacoustic environments of earlier days, perhaps it is no fluke. After all, Bielmeier studied composition with Robert Carl, himself a student of Xenakis. What may have been influential in Bielmeier's approach is so thoroughly internalized that what we appreciate in Betty feels wholly original.

At times one hears affective harmonic melodic sequences that might have come from the mind of late Mahler, had he been alive today and a practitioner of the electronic arts. But at the same time and at all times there is such a rich unfolding of ambient sound panoramas, each cluster of timbres evolving and encompassing the listener with an orchestral depth and nearly unspeakable beauty. In that way we experience timbral development as much or more than melodic-harmonic development. A sensual attention to timbre as an unfolding,  secret inner world Indian music masters have long practiced. . . sound as richly representative of deity. Bielmeier does that in his own way.

It is a music that gets an initial impetus from sustained, altered resonances, an unparalleled sonic design  that is then subjected to development and permutation. Each movement grows within itself so that the development is never into a completely "other" soundscape, is not variational in any post-Darmstadtian way, but rather hypnotically static yet ever moving within itself. There is no feeling of a minimalism per se so much as an organicity of internal presence that rivets the listener through a natural world kind of difference and sameness in dialectic balance.

I come away from this CD knowing that Betty and the Sensory World is one of the more profound electroacoustic works I have heard in a long time. Anyone who reads this will I believe be very moved by an immersion in its enchanted world. If you can dream lovely dreams, you can enter this music in the same spirit.