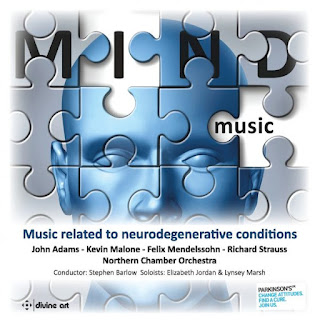 A most unusual volume today. MIND Music: Music Related to Neurodegenerative Conditions (Divine Art 25138) gives us four compositions on two CDs. It was an outgrowth of a concert given by clarinetists Elizabeth Jordan and Lynsey Marsh in honor of their two parents who died in 2014 from complications arising out of Parkinson's Disease. The concert was to raise money for Parkinson's UK.

This album was conceived in the same spirit. Its proceeds will go to Parkinson's UK as well. All four works on the program have something to do, as the title suggests, with neurodegenerative afflictions.

Felix Mendelssohn died at age 38, probably of a subarachnoid hemorrhage, which is sometimes linked to Parkinson's. His "Concert Piece No. 1 in F Major, Op.113" for clarinet, basset horn and orchestra has nothing directly to do with his ultimate end, nor need it. It apparently came about via Felix's craving for Bavarian dishes, which were unavailable to him while he lived in Berlin. A deal was struck with the father-son clarinet soloists Heinrich and Carl Baermann. They would prepare two of Felix's favorites, steamed dumplings and sweet cheese strudel, and he would at the same time write them a concert piece they could perform on tour. Hearing the work so nicely performed by Jordan, Marsh and the Northern Chamber Orchestra, I would imagine that the clarinet duo were on the winning end of the deal. It is a delight to hear.

The work that follows, Richard Strauss's "Sonatina No. 1 in F Major for 16 Wind Instruments 'From an Invalid's Workshop'" was a product of the period following Strauss's completion of the opera "Capriccio" in 1942, after which he vowed to compose no more. He broke that vow regardless with some very beautiful music. The Sonatina was one such work, written while Strauss suffered from a series case of influenza and also was in depression, the latter in part because of the wartime destruction of the Munich Court Theater, which had important associations for him. The music is bracing and in turn regretful. The performance is quite worthwhile to hear.

The central work of this program to my mind is John Adams' "'Gnarly Buttons' for Clarinet and Small Orchestra."  It has much to do with his clarinet-playing father, who succumbed to Alzheimer's. The music is magical, with ordered variations on cellular motives but also a sort of quasi-naive, folk quality that reflected his father's involvement with marching band music (as well as jazz and classical). His decline is reflected in the music as well.

Kevin Malone's "The Last Memory" for Solo Clarinet comes out of his experience with his father and the degeneration from Alzheimer's he endured. His father's struggle to differentiate from current events and the memories of past events has thematic implications in the realization of the work for clarinet and digital delay as a sort of mind as echo chamber, where past memories recur in the mind again and again, creating an internal state as strong or even stronger than external real-time presence. It is a haunting work and well done for all that.

In sum this is very worthwhile music. The Adams work alone is worth the price of admission. Yet all of it fascinates and pleases. And you will be helping Parkinson's UK!

So go for it.
Posted by Grego Applegate Edwards at 7:38 AM