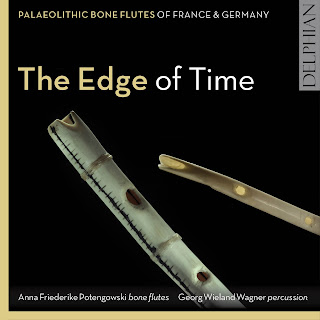 The idea of the archaic and new music rub shoulders on The Edge of Time, Paleolithic Bone Flutes of France & Germany (Delphian 34185). On it Anna Friederike Potengowski plays a number of reproductions of bird bone and ivory flutes discovered at sites in France and Germany. The original finds hail from the Paleolithic, some 40,000 years ago. They represent the earliest direct evidence of humanity as a music-making animal. What the music sounded like we cannot know, of course.

Flautist Anna Friederike Potengowski has learned to play four reconstructions of the flutes, working intuitively with the instruments to develop a well-conceived playing technique. She is joined by percussionist George Wieland Wagner for a number of compositions the two have assembled around the flute and percussion possibilities, plus an improvisation or two and a composition by John Cage and one by Rupert Till.

The resultant music, by imagining a distant dawn of music, is a mysterious meld of sophisticated primitivism as new music. That John Cage's "Ryoanji" does not sound out of place among these works tells us much, that a primality clears us from the residue of 1000 years of classical tradition and jettisons us forward into a kind of rediscovery of our putative roots.

The flute work by Potengowski involves a technical triumph, plays upon the complex sonic possibilities inherent in the deceptively simple constructions of wood and bone. And who is to say she is wrong to put so much artistry into the playing? We cannot know how good any given Paleolithic flautist might have been. And in the end it does not matter.

What does matter of course is the music as it speaks to us. It is a creative winner on all counts, varied and haunting. There is nothing quite like it.

You with a sense of adventure would do well to hear this one. It is simultaneously a meditation on our origins and a music very much of today. Bravo!

Email ThisBlogThis!Share to TwitterShare to FacebookShare to Pinterest
Labels: new music for paleolithic flutes and percussion, the edge of time paleolithic bone flutes of france and germany potengowski wagner gapplegate classical-modern review, the old in the new