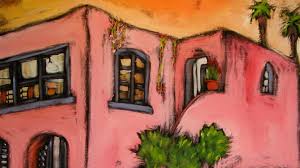 Howard Hersh is a composer with lots of ideas, inventiveness, and an open stance as to how to position stylistically. I reviewed and loved his album of keyboard music, Angels and Watermarks (see post of March 27, 2015). The Piano Concerto showed him to be very adept and original in his "post" approach to long form, and the solo harpsichord works gave us a more intimate view.

Now we get a lot more music on the strictly chamber side of the coin, Dancing at the Pink House (Snow Leopard Music 201). The five compositions all show Hersh off as a musical poet not satisfied to remain in place, but ever to move forward.

"Madame's Tavern" (2014) opens the program with Mary Rowell on violin playing against a "phantom choir" of 15 pre-recorded violins. It is a sort of mini-concerto with a wealth of inventive signposts in a continually moving matrix both expressive and beautiful in a sometimes relatively hard-edged yet evocative manner. It leaves an impression of a lively musical mind, restless but elated.

"Loop" (2006) pits cello, piano and vibraphone in a mysterious, ostinato based blend that opens up another vista and breaks through to it with a forceful, then gentle plein air traversal. It is a landscape we simultaneously sense an uncanny deja vu with but then find much that rejuvenates our living within it. A ravishing work.

"I Love You, Billy Danger" (2012) gives us 12 minutes of solo piano music. It is a sort of aural tongue-twister with a dashingly bold modernistic flourish to it. This is quite involved and difficult to play pianism which Brenda Tom tackles heroically and effectively (as she so capably and brilliantly did on Howard's last album). It rolls forward inexorably and memorably, then abruptly hushes, only to pose a series of quiet questions, all of which have emphatic answers. Then gradually the question itself becomes the answer as it morphs into full thematic flower and onwards from there.

"Night" (2013) takes us into trio territory again, this time with clarinet, marimba and percussion. The clarinet part projects outward in a sort of post-Gershwin jazzy way. The marimba puts down a mobile wooden flooring of sorts that enables the clarinet to bound forward. The percussion subtly punctuates and colors. Momentum takes a hold with a more rhythmically vibrant marimba part that then opens up to quieter realms again.

"Dancing at the Pink House" (2006) deserves its title status with clarinet-piano folk-modern-vernacular expressions with a quietly driving motility of a dance-like sort. Ultimately the dance calms and opens up to a more lyrical introspection, ultimately to return to the motion of body-in-movement,  and in the end to take on a quotation from "America the Beautiful." Unforgettable, this is.

And that is the whole of it, or as much as I can touch upon in this framework. It is music that holds a place in your musical memory as something with a very personal, original fingerprint. It is music that continually underscores its presence in the contemporary United States, yet transcends that rootedness too with a music anyone can appreciate who has the ear to do so.

Very worthwhile! Hersh is a voice.

Posted by Grego Applegate Edwards at 7:40 AM