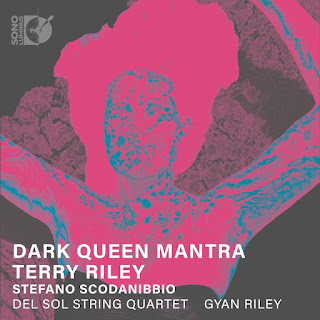 Without a doubt composer Terry Riley has been one of the most important composers of our time, creating the iconic "In C," arguably the most influential and appreciated composition in the rise of so-called minimalism, and then going on to follow his own muse, ever broadening his outlook in a body of works that retain high interest and embrace innovative approaches to this day.

The Scodanibbio "Mas Lugares" combines minimalist motor-propulsive forwardness with starkly effective re-presentations of a Monteverdi Madrigal. It is a deft intermingling of string color and repetition versus through composition.

Riley's "The Wheel & Mythic Birds Waltz" stands midway between "In C" and the title work. It is motor-rhythmic and cyclical-repetitive in a much looser way than Riley's earlier work and that of typical proto-minimalism. It is clear hearing the 1983 composition that he had well begun to distance himself away from the trance underpinnings of the initial music yet still remain melodically vibrant in his special way.

The "Dark Queen Mantra" of the title further realizes the movement away from the trance-inducing early work that we still hear vestiges of in the "Waltz." "Mantra" turns it further towards a continual development and a horizontal melodic openness. It positions itself mid-point between quasi-Indian modal form and classical-structural considerations. It is fully freed from the trance-over-time change of "In C." It does all of this in brilliant ways very much characteristic of Riley's overall lyric thrust. It is a work of honest yet baroquely complex beauty!

When we weigh all three works on this CD program we come away satisfied that some important post-minimalist music has reached our listening selves in enlightening and pleasurable ways. Kudos to all concerned!
Posted by Grego Applegate Edwards at 6:37 AM