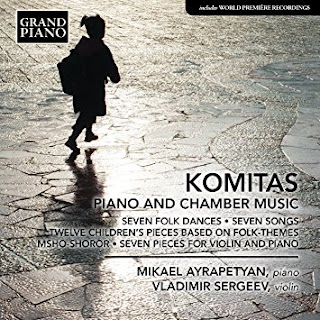 Komitas (aka Komitas Vardapet) (1869-1935) was Armenia's principal composer of the modern period. Khatchaturian may be better known, but then he was as much Russian as Armenian in style. Komitas thrives on a recent release of his Piano and Chamber Music (Grand Piano 720). The music has a strong traditional Armenian identity, minor-modal in its special way.

Mikael Ayrapetyan takes the piano chair and acquits himself well on the solo piano works, which consist of "Seven Folk Dances" (1916), "Twelve Children's Pieces Based On Folk-Themes" (1910), Misho-Shoror" (1906), and the World Premier recording of "Seven Songs for Piano" (1911). Vladimir Sergeev joins on violin for the World Premier of "Seven Pieces for Violin and Piano" (1906).

Komitas had humble origins as the son of artisan parents in Turkey, He early on distinguished himself as a singer. In his subsequent tutelage as a seminary student he became familiar with ancient Armenian chant, hymns and folksong heritage. He was ordained as a monk and went on to compose the works that we remember him by. The Ottoman pogram against Armenians so unhinged him that he ended up in a psychiatric hospital where he resided until his death in 1935.

Like Bartok and Khachaturian he envisioned the national folk legacy of his people as a vast repository of  cultural value and sought to create pedagogical works for children as well as more complex art music works that deeply reflected on folk elements.

The album at hand gives us a well chosen sample of both kinds of works, the "Twelve Children's Pieces" standing on one end of the spectrum, the "Seven Pieces for Violin and Piano" at the other.

It is a program of great beauty, well played. Anyone who loves Armenian music (perhaps via the music of Hovhaness) will gladly appreciate this one, as well as anyone interested in folk inspired modern classical. It is a real treasure!
Posted by Grego Applegate Edwards at 6:58 AM