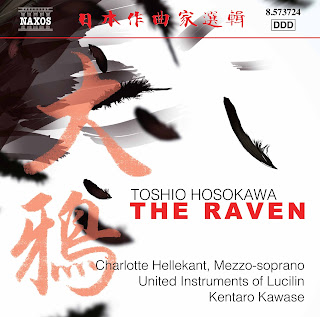 Toshio Hosokawa is one of the premiere living Japanese composers. I have covered his music before (see the September 23, 2014 post and also that from November 3, 2011). Today we have The Raven (Naxos 8.573724), a modern-oriented work for mezzo-soprano (Charlotte Hellekant) and chamber orchestra (United Instrumentation of Lucilin under Kentaro Kawase).

It is based on Edgar Allen Poe's iconic poem. A full recitation of that is followed by Hosokawa's work, which in turned is presented in the form of a traditional Noh drama.

The music is spacious, sombre, mysterious and more or less high modernist in its sprawling expanded tonal rigor. The dark mood has a musical analogy, which is sure-footed and very atmospheric.

Mezzo-Soprano Hellekant and the United Instruments of Lucilin give us a detailed and carefully expressive reading of the work.

Poe's poem and its raven-centered theme appealed to Hosokawa for its similarity with Traditional Japanese tales, which often focus on plants and animals in dialog with human subjects. He felt that it readily lent itself to Noh dramatic treatment. For The Raven work Hosokawa transforms the narrative human subject from man to women, which also is consistent with Noh tradition. To the Western listener such elements are not readily apparent so much as there is a cogent use of aural spaciousness that Noh music shares with this work.

The composition is dedicated by the composer to Hellekant and United Instrumentation. The close rapport between music and performers is apparent and a large factor in the success of the disk. One at this point could scarce imagine a better reading.

It is a rarified music of great dramatic heft. One is given yet another chance to appreciate the breadth and scope of Hosokawa's poignant music vision. All interested in Japanese modernism today should hear this one. It is revelatory and absorbing.
Posted by Grego Applegate Edwards at 6:10 AM