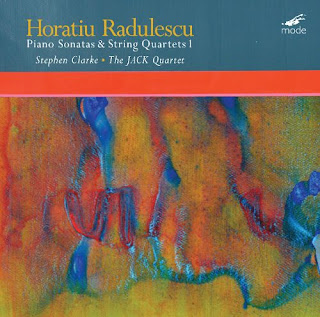 Apparently there have been shifts in the outlook of Romanian composer Horatiu Radulescu (1942-2008): his Romanian period, the "plasmic music" of his post-Romanian days (during the first part of his residency in Western Europe), and the final phase, which worked at times within more traditional forms, albeit in very personal, idiosyncratic ways. The latter is represented in the first volume of Piano Sonatas and String Quartets I (Mode 290). The JACK Quartet and pianist Stephen Clarke nicely do the honors for the program.

For this initial installment we hear the "String Quartet No. 5, Op. 89 'before the universe was born'" (1990-95) in first recording. Its sprawling sonic panorama of harmonics is hardly traditional except as accommodated to string quartet instrumentation.

The piano works heard here on the other hand at first have a more straightforward simplicity about them. The Romanian folk-like diatonicism-plus disarms on the "Piano Sonata No. 5, op. 106 'settle your dust, this is the primal identity'" (2003). Yet it is something more than a primality.

The "Piano Sonata No. 2, op. 82 'being and non-being create each other'" (1991)  is more overtly modernistic though at times folk-like as well. There is a post-Messiaenesque deliberateness that nevertheless has Radulescu's personal stamp on it, as it were. The first movement has widely spaced, powerful sonarities. Movement two uses mixed modalities and a held right pedal to represent "Byzantine bells." The third movement has an ostinato in 15 with fragments of earlier works quoted in the right hand.

All-in-all this is a most promising start to the series. All the works have a special idiomatic quality to them, an around-and-back melding of modernism and a whispy suggestion of archaic antiquity as filtered through Radelescu's musical vision.

I recommend this one warmly to you.