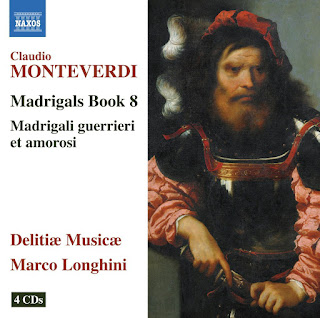 Throughout my life the music of Claudio Monteverdi (1567-1643) has become increasingly central to me. Of course he was one of the beacons of early music. Although his music reflects his times there has become a point to me where his music stands alone, apart from the era, like Bach for a later period.

Feeling like I do I welcomed the chance to review a new version of Madrigals Book 8 "Madrigali guerrieri et amorosi"  (Naxos 8.573755-58) by Delitiae Musicae under the direction of Marco Longhini. The four-CD set manages to luxuriously include all the madrigals plus the lengthy 48 minute "Ballo delle ingrate."

Delitiae Musicae approaches the music with loving care and period rigor. The Ensemble vocale features nine singers used in varying combinations. Included are two countertenors and a boy soprano in keeping with performance practices. The Basso continuo comprises some nine players, including baroque harp, two theorbo and so on. Then as called for there is the Ensemble di viole da gamba (with soprano, contralto, tenor, and bass instruments). Finally there is the string section per se, the Ensemble di archi barocchi, with eight instrumentalists.

Throughout the course of the program, the continuo is a constant, the singers are assigned solo, duo, and other small configurations in contrast with the tutti passages. Similarly the ensemble instrumental groups appear variably according to the demands of the score.

The sensitive timbral period dimensions of the music bring to us an authentic and beautiful sound. All come together in varying combinations for a sterling performance in all its facets. This is later Monteverdi in full flower, with contrapuntal imitation contrasting with homophony in various Montervedian ways. As the composer states in his introduction to Book 8, the music addresses the "agitated," the "soft" and the "moderate" in ever varying sequences. Contrasts too are ever present between the "theatrical" and those numbers that are more purely musical, that are to be "sung" more than enacted.

The resultant whole that is the sequence of Book 8 has a richness and inventiveness brought out wonderfully well by Delitiae Musicae. The full effect of the totality is cumulative. By the time you come to the end, you feel you have grasped the extraordinary beauty and character of later Monteverdi with a period faithfulness that brings out the wealth of expression that marks out Book 8 as exceptional in itself.

The Naxos price just adds to the desirability and attractiveness of the set. It is a near ideal performance of music one must dwell within for a time to make it live for you. Once you do that, you are transported!