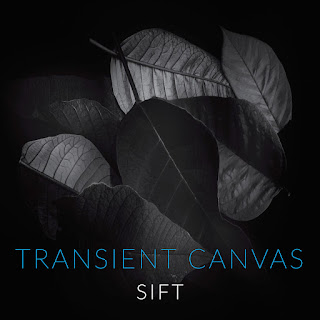 Some music just lays right from the first hearing. Further listens fill in the details and yet the initial impression sticks with you. I feel this way about the duo Transient Canvas and their album Sift (New Focus FCR 190). It is a full length recital showcasing the bass clarinet work of Amy Advocat and the marimba of Matt Sharrock. The two instruments together make for a deep and rich sonance realized especially well by the fine artistry of the two.

Five new music composers contribute one composition each. You may or may not know of these craftsperson-artists. It does not matter because each has something to say and brings out the color and dramatic potentialities of  the instrumentation.

Each work embodies a literal intent. The respective composer explains what that is in the liners. I paraphrase here. The title piece"Sift" (2014) by Daniel T. Lewis puts in musical terms what remains of a resolve when long subjected to struggle, and the exhaustion and collapse that can follow. Tina Tallon's "Dirty Water" (2014/16) is her tribute to Boston and an allusion to but not quotation from the Standells' old pop-rock hit.

Chris Hughes and his "Vestibule III" (2013) comes to grips with an ever shifting transition between contrasting stylistic worlds, something all who follow new music modernism in its current incarnation can sense as part of where we are now.

John Murphree's "Purge" (2013) creates in analogic musical terms a casting out of what once was or even still is important.

The longest and perhaps most ambitious of the works concludes the program, namely Adam Roberts' "Nostalgic Variations" (2015). It contains within the main theme and its variants a middle path between "saccharine expression" and on the opposite pole "irony and rejection of emotion."

The experience of the music itself understandably transcends or deepens the impact of any given composer's intent. This is contemporary music that neither rejects a modernist stance nor does it replace it with something wholly other. It is a series of cogent and fascinating vehicles that allow the duo and their very singular instrumentation to flourish and establish an immediate present-day identity. It is in the process a very absorbing and even exhilarating program all new music adepts will gravitate towards appreciatively, I would think.