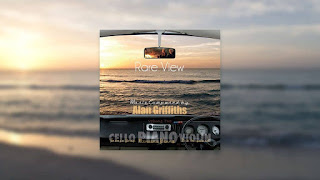 I covered the music of Alan Griffiths a while back on these pages (see the entry from February 28 of this year for that review article.) He in the meantime was kind enough to send me another volume of his compositions, which I now talk about a little bit. The album came out a fairly short while ago. It is a recording of some twelve brief chamber works of his for piano, cello and violin, in various combinations.  It is entitled Rare View, Volume Two (SONY Australia). The album grew out of a series of happenstances--a new microphone developed by SONY, a new Yamaha grand piano, a librettist Alan came to know, a new concert venue, and a wish to record the entire project solely with solar power, to make a recording with no carbon footprint.. The music is dedicated to Alan's late friend, activist Paul Martin.

So we have a second volume of the music (I have not heard the first.) The solo piano works continue to peek my interests, as they did on the last album I reviewed. Nicholas Young plays them very well. It is not exactly all "Modern" in the typical sense, though some feel that way. They are Tonal, Neo- and so also are the works that include violin (Dominik Przywara) and/or cello (George Yang). All three players come through with excellence, and they give us the compositional whole in near-ideal ways.

I do most appreciate the solo piano music here.

If Rare View plays with the idea of "Rear View" as in the rear-view mirror on the cover image, it is deliberate of course. This is decidedly not music that looks forward exactly, though one cannot not do something of that when writing new works. And face it, if we are to have an "avant garde" it is necessary that there be a "rear-view garde" so to speak, and Alan Griffiths re-traverses later Romantic expressiveness in ways that actually and perhaps paradoxically do not look backward in some imitative sense but instead take the working premises or the essence of Romantic "fullness" and remakes it all in his own image. In the end the piano music at any rate is tumultuous and so in part has a kind of "Early Modern" fire to it that you might hear in Scriabin or Prokofiev piano solo music at times early and mid-period. Yet it does not sound especially Russian because it is not. And though there is occasionally some tension via a bit of dissonance it is not the primary form of presentation.

That is not at all to say that the music that includes cello and/or violin is not interesting. It all is that. But to appreciate this music for itself one should forget about "progress," "teleology" or some kind of long-scale of development such as music history models have engaged in for so long. Not that there is anything wrong with seeing the artistic world in those terms. It just is not especially relevant to appreciate this particular music.

Yet there is plenty to savor nonetheless. If you do NOT care about labels, here is music to get yourself into, by a composer of talent. Give it a close listen if you can.

Posted by Grego Applegate Edwards at 9:50 AM