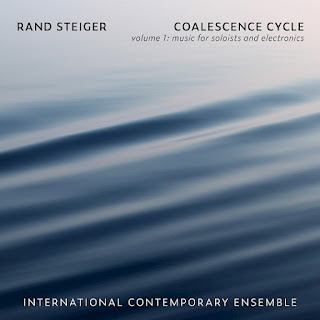 One can never be sure from one month to the next exactly what music one will hear. So an open-work world-mind is a healthy one to maintain no doubt. Here is one I did not expect to get yet now that I've heard it a number of times I am glad of it. That's Coalescence Cycle, Volume 1: Music for Soloists and Electronics (Tundra/New Focus Recordings TUN 013) by composer Rand Steiger with soloists of the International Contemporary Ensemble.

This is on the surface of things a pretty straightforward proposition. Selected soloists perform expressive fare that lands on this side of Jazz-based Improv in its vibrant performativity, yet is firmly in the New Music camp.

The soloists conjoin with electronics that build out of the instrumentalist's part closely and/or co-exist in direct parallel to it. The idea of harmony melding into timbral complexity is what lies behind these works conceptually. Instrumental part and electronics conjoin closely via expressly sequenced live signal processing by means of special software applications by Miller Puckette. In live versions the sound of the instrumentalist(s) is processed and disseminated out of six loudspeakers distributed throughout the auditorium. It is reduced to stereo in the present recording. The note choices center around natural intervals that occur in the harmonic series. Understandably this lends itself to the timbral-chord ambiguity that Rand Steiger seeks to explore.

There are interesting, captivating musical events happening continuously throughout, but I must say I have been especially taken by the opening "Cyclone" for clarinet, "Light On Water" for flute-piano and the closing bassoon-timbral excitement of "Concatenation." That is not to cast aspersion on the others, just to note that the opening and closing gambits are the most dramatic and appealing each in their own way.

All the soloists come through with dynamic and exciting performances that one hears with pleasure. So kudos to Joshua Rubin on clarinet, Claire Chase on the flute and piccolo, Kivie Cahn-Lipman on cello, Jacob Greenberg on piano and Rebekah Heller on bassoon.

I find the album a stimulating listen. It illustrates the current live organicism that much of the Electro-Acoustics we hear today espouse. It all works together for an emphasis on performance yet gives us plenty to focus upon in the deliberate systems-compositional forms. Recommended for those open to intriguing new examples of live electronics as it evolves into the Modern future.
Posted by Grego Applegate Edwards at 8:22 AM