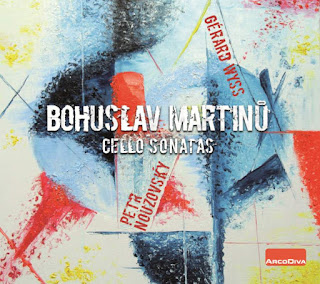 Martinu (1890-1959) continues to surprise me with the breadth and depth of his output. There are many facets, many sides and no monolithic singularity so much as a multi-stranded set of possibilities according to period and configuration. These considerations seem once again critical as I consider the recent album of his Cello Sonatas (ArcoDiva UP3212-2131). Cellist Petr Nouzovsky and pianist Gerard Wyss make a formidable duo as they dramatically evoke the gravitas, complexities and brilliances of all three Sonatas for Cello and Piano as completed in 1939, 1941 and 1952, respectively.

As one gets to know the three sonatas one is once again reminded that though Martinu has been taken for granted in some circles, in reality he has the importance of a Bartok, a Janacek, a titan of Eastern European Modernism with some chamber bloomings here that rival the very best of their sort.

Clearly the Nouzovsky-Wyss Cello Sonata collaboration has been a labor of love. The two delve deeply within the music and remain there throughout. The significance of each periodic phrase floats aurally until it is given the weight and absorbed articulation it deserves. Considerable technique and balanced expression join together to make of the hour-long enactment something profound indeed.

With every successive listen I become more convinced that these sonatas are not only some of Martinu's very best chamber works, but also that they rival the very best of the 20th century repertoire for cello and piano. Perhaps one might go so far as to assert that Bartok is to the string quartet as Martinu is to the cello-piano sonata? Certainly one might argue it. In any event this is a very fine reading of some major works. One benefits greatly from the hearing of this program, or I have at least. The thematic outpourings never cease, the invention level is remarkably high, consistently so and the idiomatic possibilities of the endless significant scoring gets benchmark realization here.

This is nothing short of a monumental outing. Any serious listener to the wealth of Eastern European 20th Century gems will want to hear these performances. Bravo!
Posted by Grego Applegate Edwards at 8:07 AM