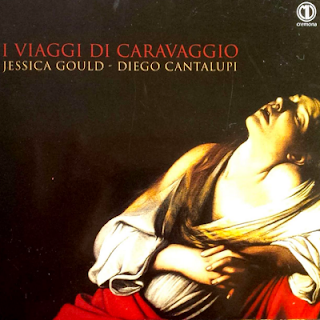 We might count ourselves lucky to be alive at a time when Early Music is getting more detailed attention, more historically accurate performances, while an ever wider range of repertoire is covered, if you take stock of recordings released between, say, 1965 and today and compare that with the time before.

A happy thing that is to me, for I am always glad to enlarge my knowledge of the older forms of music. Today I get to tell you about a recent album covering music I am not all that familiar with, namely I Viaggi di Caravaggio (MVC 17043), an enlightening program of early Seicento motets and arias performed with flair by soprano Jessica Gould and Diego Cantalupi on lute and chitarrone.

The music hails from 1603 through 1643 and features beautiful examples by Benedetto Ferrari, Laurencini, Giovanni Felice Sances, Giovanni Antonio Rigatti, among others, and three by Giovanni Girolamo Kapsberger, the latter of which in the liner notes Diego Cantalupi hails as a key figure bridging between early and later style incarnations.

This is not especially contrapuntal music but there is a sort of earthy kind of dialog between voice and instrument that is rousing, and at the same time sophisticated. The liners suggest that no matter the subject of the song that it was a time when artists and musicians lived full lives of passion and color, and that life of course necessarily spilled over into their creations one way or another. The lyrics--made available in the original Italian and in English translation, tell us something of such concerns and suggests to us us the full humanity of those involved.

We have encountered happily Jessica Gould earlier this year (type her name in the search box above for that review). Today's outing shows again her wide-ranging dexterity and power, the beautifully idiomatic, very light vibrato and punchy directness.  Diego Cantalupi's lute and chitarrone playing is simply marvelous. Together they give us beautiful readings of music I for one am very glad to know.

This album will make Early Music enthusiasts smile. And other adventurous souls will no doubt get pleasure from this as well if they make the effort. I for one am glad to have it to hear again.
Posted by Grego Applegate Edwards at 10:17 AM