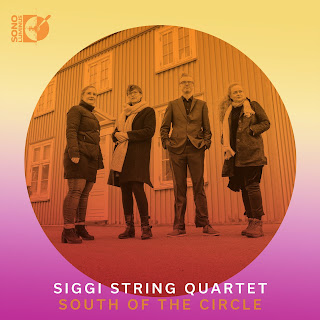 The Siggi String Quartet play repertoire from as far back as the Renaissance but they love the early-to-later Moderns as much as anything and thrive in collaborations with living composers. In their South of the Circle (Sono Luminous 92232) they present some of the very newest of New Music from composers of northern climes.

One might call much of this music Post-Atonal, because most all of it has a pretty clearly defined tonality yet it does not at all sound as if it is looking back as much as it is finding a way of expressing our moment alive today. All of it requires a true sensitivity to sound color which the Siggi Quartet provides in full, poetically so.

The five composers are duly weighed in on the liner notes. Daniel Bjarnason is said to be on the very edge of the new. He won the 2017 Icelandic Music Award composition of the year for Brothers (which was a Sono Luminus release). His "Stillshot" (2015) begins the program. Una Sveinbjarnardottir is a founding member of the quartet and concertmaster of the Roykjavik Chamber Orchestra. She has worked with Boulez, Penderecki and Rostropovich among others. Her "Opacity" (2014)  graces the CD as the second composition heard.

Valgeir Sigurdsson loves to blur distinctions between the acoustic and the electronic and won Iceland's album of the year award in 2018 for his 4th album Dissonance. "Nebraska" (2011) gives us a worthy quartet example on the program here. Mamiko Dis Ragnarsdottir is a Classical pianist and comes to the music with some rootedness in Jazz and Pop. She shows us an original sort of Minimalism with an introspective side on the included work "Fair Flowers" (2018). Finally there is Haukur Tomasson, who won the prestigious Nordic Concert Music Prize in 2004 for his opera Gudrun's 4th Song. His "Serimonia" (2014) ends the program on an adventurous and harmonically edgy note.

The Siggi String Quartet excel on this album in the meticulous way they realize each work with close attention to sonority and space. Their excellence of detail within broadly sweeping readings make for us music that nearly startles after one takes the time to immerse oneself in the music. Extended techniques and subtle sound blends make a world you find the earful self entering more and more thoroughly with each listen. Like the best of New Music performances it enters a sort of ineffable place where the sounds speak in ways words cannot.

I defer to this music with deep respect and appreciation. Highly recommended.
Posted by Grego Applegate Edwards at 6:40 AM