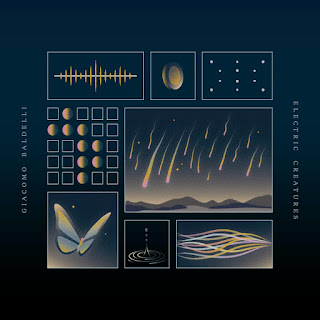 Electric Guitarist Giacomo Baldelli shows us how and why Contemporary Classical can be today more or less whatever the composers and performers wish it to be, given an audience open to the new as New. His album Electric Creatures (SD015) provides us with a way the fully electric guitar can be a fulcrum point for vibrant New Music.

Five works give us pause and furnish us headroom for explorations. From the opening with Eve Beglarian's repetition, mesmerization and melding together on "Until it Blazes," to Andrea Agostini and "Three Electric Creatures" with a Metal blazing forth into compositional swirls, we recognize and appreciate the musically astute intersections from Rock into the Avant Classical realm, which of course we have had intimations and realizations of long before from Hendrix to Pink Floyd to Fripp and Eno on one hand, and composers like Francis Thorne on the New Music side a long while ago on the other.

The intersection continues with Ryan Pratt's "Two," Jacob TV's "Grab It!"and Nick Norton's "Slow Earth." One in the end enjoys the fully cranked potential of the electric guitar realized with a musicality that intrigues and reminds us how far we have traveled from the days when it was startling to read on the cover of The Ventures in Space how all those funny sounds were created with electric guitars, or on the other hand to appreciate the sound of BB King, strings singing and blazing forth in ways that were more like a violin than an acoustic guitar, or then Jeff Beck with the Yardbirds and that silky sort of distortion he got. If we hear Hip Hop interjected it is still Blues, Psychedelia, Metal and electric Ambiance that constitutes the prime mover here and good for all that.

That tomorrow was there already in 1965 was of course true as the rise of the Modern in every cultural sense was both latent and very present in that period so that we can now look back upon it all and perhaps understand more fully.

Giacomo Baldelli executes the five pieces with fire and polish in equal amounts. In so doing he opens the door yet further for the full integration of electrics into the avant of New Music.

Hoorah for that! If you do not find that interesting, then perhaps this one is not for you. Otherwise, by all means.
Posted by Grego Applegate Edwards at 9:18 AM