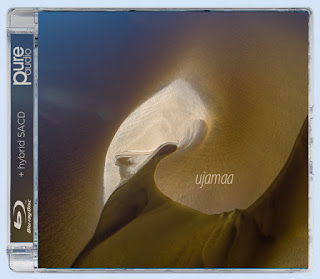 In the gloomy and dark room where my CDs wait for review the album at hand unwittingly blended in with the walls. This morning I am happy to report in on it, for it is not just some item among the many, but rather a special album deserving attention. Composer Henning Sommerro gives us his two symphonic panoramas on the CD Ujamaa (2L 146). The CD (and Blu-Ray multichannelled companion) contains both "Ujamaa" and "The Iceberg," two vibrantly atmospheric and descriptive Tonal Modern works in a tradition of the generally distinctive nature of offerings from up North. The disk was recorded in Trontheim, Norway.

Ingar Heine Bergby conducts the Trontheim Symphony Orchestra and Choir on "The Iceberg" and just the orchestra for "Ujamaa." Lena Willemark, vocalist and folk fiddler is joined on "Ujamaa" by saxophonist Jon Pal Inderberg along with bass clarinetist Rik De Geyter and percussionist Espen Aalberg. Lena is rather remarkable in her vocal stylings. For "The Iceberg" we hear from soprano vocalist Eir Inderhaug and baritone Florin Demit with excellent results.

And what of the music? It is unabashedly folksy contemporary pastel tonal I suppose you could say. "Ujamaa" is more overtly rhythmic and folk-like with some extraordinary, wildly and exuberantly skipping-ranging vocals from Lena Willemark. "The Iceberg" unfolds in more descriptive ways as chorus, soprano and baritone blend with the orchestra in an almost cantata-like massing and delineation.

A mysterious cover notwithstanding, in that it renders the prospective listener nearly clueless, this is a most interesting program performed with true distinction. Sommerro comes through in a Northern Impressionist colorfulness in the best of Scandinavian traditions yet manages to say in two works things that speak in utterly original ways.

If I devote less space to actual music description this morning it is not because the music lacks character. On the contrary there is so much character (in the Nielsenian sense) that the music speaks wholly and most eloquently for itself. It is perhaps enough to say that every bar seems deliberate and masterfully built for an expressivity all its own.

If you crave the new, here it very much is. I recommend this wholeheartedly for all without preconceptions of what the "Modern" is supposed to sound like. This is a universally local music wholly within itself in the best original ways. Strong!
Posted by Grego Applegate Edwards at 12:46 PM