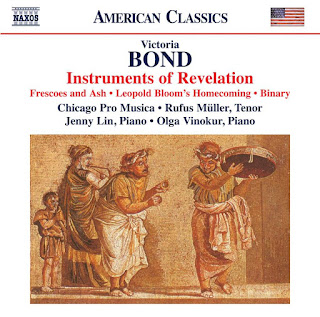 A program of chamber music in first recordings is what we contemplate this morning, in other words New Tonal Music 2005-2011 by Victoria Bond (b. 1945), under the umbrella title Instruments of Revelation (Naxos 8.559864). The Chicago Pro Musica does the performance honors and they are quite convincing and well worth hearing in that role.

The music has a whimsical quality throughout, whether by means of  mildly sarcastic quasi-march-gallops or a shade here and there of the burlesque. I was alerted to the attractions of this album as a huge James Joyce fan by the 20-minute "Leopold Bloom's Homecoming" (2011) based on a relevant Ulysses-oriented Joycian text sung by tenor Rufus Muller with piano accompaniment by Jenny Lin. It is broadly lyrical in a matter-of-fact way and convinces as viable vocal art without sounding as "radical" as the Joycean original, but that is OK. What I mean to say is that the music gives the words less of a stream-of-consciousness and more of a deliberation a la Britten with Henry James? No matter because it is nicely done and memorable.

The short piano solo work "Binary" (2005) is the more exploratory of the works here, with a convincing rhythmic punch that has a slightly "Jazzy" pedigree and clustering quasi-pentatonic-chromatic thrust that comes through nicely as played by Olga Vinokur. The music I read in the liners is based on a Brazilian Samba, which makes sense of it all once you know. The "Binary" of the title alludes to the composer's treatment of the digits zero and one, which the unaided ear may not at first catch but no matter as the music is compelling.

Backing up to the first works on the program we have the title piece. "Instruments of Revelation" (2010) which is for a large-ish chamber ensemble. The music has some somewhat Stravinskian whimsy a la L'Histoire du Soldat in an extension and a furtherance that goes beyond the original feeling and then segues into other realms. There is a pronounced descriptive exuberance at times that is captivating.

"Frescoes and Ash" (2009) has a rippling rhapsodic feel to it, a Carnival of the Animals sans animals flavor at times, descriptive and absorbing. The chamber ensemble sounds quite full thanks to Ms. Bond's artful scoring. There are times when I am slightly and favorably reminded of the hushed stillness of Vaughan Williams' "A Lark Descending,"  but then Ms. Bond moves forward into her own zone and the feeling goes to be replaced by another vista not without its own artful quality. Regardless there is poise and good humor throughout.

And as all is said and done with this program one feels refreshed and in the presence of a lively musical mind. This may not quite be a music of sturm und drang, but if you listen on its own terms there is music to like just fine, to draw a smile, to give is a puckish Midsummer Night's Dream without Puck himself or the Fairies. It is enchanted music nonetheless. Listen.

Posted by Grego Applegate Edwards at 11:12 AM