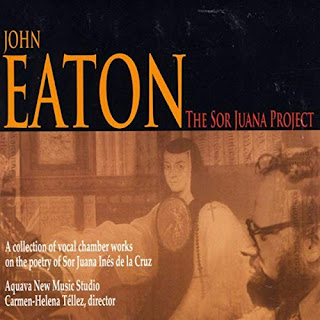 John Eaton (1935-2015) was an exceptional American composer of the High Modern stripe, known for vocal, electronic and microtonal music especially. Eaton set a number of poems by Sor Juana Ines de la Cruz for chamber group and one or more vocal soloists. The whole of it fills two CDs in the recent Sor Juana Project (Aquava New Music Studio CD-1-20193-T), performed with precision and a flair by the Aquava New Music Studio under Carmen-Helena Tellez. Vocalists Tony Boutte, Hyona Kim, Bridget Parker and Kate Maroney have presence and poise throughout and the ever-varying instrumental accompaniment is extremely well done and exciting to hear I must say.

The music is exceptional in a rangy High Dodecaphonic sounding way. There are four clusters of works to be heard and each has something special happening in it. "El Divino Narciso," the very brief "Tocotin," and on CD2, "Sor Juana's Dream" and "Sor Juana Songs."

One ideally listens to this music repeatedly, for the full impact of it is only apparent four or five listens into it all. That is so with much New Music of course, if nothing else it is one of my mantras, and it is so here. The harmonically advanced non-tonal sound, the rhythmic irregularity we come to associate with the High Modern of the last century, and the timbral mapping and delicately complex interplay of instruments and vocalists require exposure over a bit of time to grasp fully.

And supposing you put in the time to hear this music enough times to comprehend it, you will get a sort of precis of the Eaton legacy--a very cogently expressive and inventive Modernist who spoke atonal, timbral and microtonal musical poetry with a concentric intensity and imagination that marked him in the top tier of New Musicologs of his day. Long live the music! Listen to this.
Posted by Grego Applegate Edwards at 8:32 AM