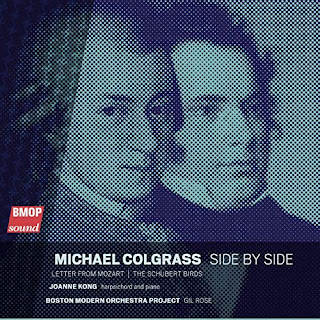 Charles Ives you can look to as the father of disparate conjoinings and aural collages when Modern North American composition styles developed and flourished in the last century through to today. Others have followed of course, people like Henry Brandt and, lest we forget, Michael Colgrass. The estimable Boston Modern Orchestra Project gives us the music of the latter with the three-work offering Side By Side (BMOP/Sound 1064). On these works one can note the back and forth one gets from the concerto in Western Classical. Colgrass gives us that kind of dialog along with more involved post-Ivesian contrasts.

I found a copy of a recording of his As Quiet As years ago and liked it much, but then for whatever reason did not hear a lot more of him. The current release is an ear-opener, all making excellent use of a large orchestra to paint complex juxtapositions, transpositions and freely imaginative interactions of old and new, past and future, gone and remaining.

All three compositions give us startlingly depictive passages that suggest meaningful sound sequence by going far beyond and far more deeply into an initial textual idea that is the premise of each work, developing the musical equivalent far more deeply than one might expect. The opening example "Letter From Mozart" puts forward in music the idea of Mozart writing a letter to the composer asking him to write a work based on one of Mozart's themes. So we get Mozart and Colgrass shifting back and forth and combining in very interesting ways their stylistic outlooks. It takes an enormous grasp of both present and past worlds to do this effectively, and Colgrass does it in amazing and rather jolly ways.

"Side By Side" builds outward from a kind of dual concerto of a refined harpsichord and a more earthy prepared piano, both played nicely by Joanne Kong who figured also prominently in the work's premier by BMOP, who commissioned the piece. Everything swings brilliantly around the two instru-musical personalities that the orchestra aids, abets and comments upon in sometimes incredibly agile passagework. This is a remarkable piece!

Lastly "Schubert's Birds" goes even more directly into concerted territory, this time a concerto for orchestra based on Schubert's "Kupelwieser Waltz." The idea is that Schubert was an extraordinary songbird whose lovely sound-casting attracted other "birds" who joined in the concertizing and made for a most fruitful aural gathering for the time Schubert was allotted to this earthlife. It is very birdlike music we hear in the atmospheric opening. The subsequent virtuoso orchestral warblings must be heard to appreciated.

Colgrass, one recognizes happily on hearing this music, sounds better than ever on these works from 1976 through 2007. He is nothing short of brilliant in his handling of the orchestra. BMOP does him the ultimate service of giving us beautifully detailed readings of the scores, entering into the spirit of the various dialogs, projecting the content of the works most vibrantly with perfect idiomatic inflections as needed and a real sense of joy in the music making.

Highly recommended. This Colgrass music is essential. And lots of fun.
Posted by Grego Applegate Edwards at 9:57 AM