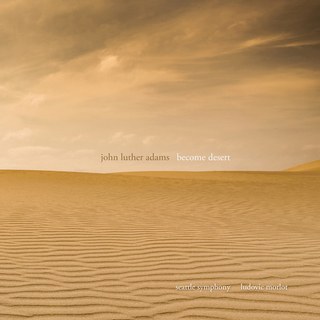 Become Ocean (2013) by John Luther Adams struck me as one of the most significant orchestral works of our decade. It won a Grammy. I gave it a rave here (type in search box above). Now Adams returns with a kind of parallel landscape-soundscape, Become Desert (Cantaloupe Music 21148) in a very fine performance by the Seattle Symphony under Ludovic Morlot.

The album comes as a set, a regular CD for standard two-channel stereo and a DVD with appropriate scenic desert photo stills and regular two-channel or surround options. In either case the sound is magnificently done.

Like Become Ocean and its earlier prequel Become River the music has an analogous relation to the tactile and visual properties of the physical imagination of a natural phenomenon, in this case a desert-scape over time.

The music begins out of absolute silence, slowly and ravishingly developing like a dawn sequence or a kind of imagined genesis, and after all everything at some point  becomes in all the ways it can, so from a total nothing we get increasing presence, like a day can become ever-more intense in nature, then it gradually de-intensifies in various ways towards a sunset and a quiet night? So too the music over its 40-minute span gradually enters with the most fragile kind of quietude, gradually grows and builds to a triumphant "thereness" and just as surely begins to ebb away until at the end there is near nothing and then poof, gone!

This is music that depends upon near drone-like sustains of layers of color-chords, beautifully orchestrated gossimers-become-glorious-formations at the peak of sun-sandiness. It is sheer sensuality on one level, brilliantly transfixing sonic structures that radically build out of a tonal assumption like nature presences itself in life itself for us if we are lucky enough to witness it.

Again like Become Ocean this is a sort of ultimate Modern Impressionism, where structure becomes entirely beholden to presenting a kind of natural essence. Time evolves slowly but ever seems suspended within itself. And sound color dominates in the most evocative and brilliant ways.

And somehow John Luther Adam's world of sound and sequence becomes an object lesson in how to keep away from the rapidly moving and the humanly tune-weaving kind of musical selfhood most have adopted through the history of organized sound. Instead Adams elects to dwell inside the timeless time we might hear in a very well realized alap segment of an Indian Raga as played by the very most accomplished improviser-artist. That is the nearest equivalent I can think of for where Adams takes us in this work. There is stillness that is in no way stationary. It moves as it stays put. It sounds out of silence and maintains the silence in soundfulness.

It is exceedingly beautiful, exceedingly well thought-out and effectively enacted. I must say I believe it is once again a seminal moment in the Modernity of the present, like Become Ocean. Become Desert slows the world down and then allows it to unfold without human intervention or disruption, so to speak, at least in its modelling of the reality it seeks to capture.

Stunning. My highest regards and recommendations I give to this musical wonder. Listen!
Posted by Grego Applegate Edwards at 8:46 AM