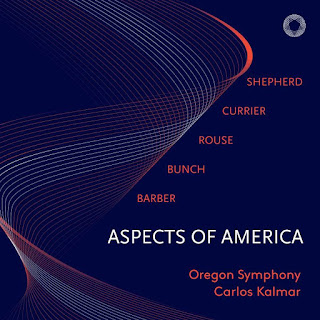 When we wish upon a star, Walt Disney told us, our dreams come true. The cover of today's musical selection has lots of night but no stars. It is a kind of dream come true in its own way, that is for anyone looking for refreshing fare in the New Music orchestral zone. The design makes it very difficult to read in low light situations however. As a result this album has been resting in a pile in a rather dim corner of my living space and I am sorry I have not noticed it quite properly until now. Happily the music makes up for the imagery. A murky mystery reveals much goodness! That is on the CD Aspects of America (Pentatone 5186 727) as performed quite nicely by the Oregon Symphony under Carlos Kalmar.

Let's start at the end. The concluding work by Samuel Barber I have not gotten to know before this, but it is delightful in Barber's unclassifiable way.  "Souvenirs" gives us a colorful and decidedly descriptive sonance in Barber's kind of lucid, unmodern way, with each of the six sections dealing with a dance form. It gives us another sort of Barber than some of the more well-known works.

The rest of the program is somewhat more on the edgy side beginning with Sean Shepherd's "Magiya," a masterful burst of light and ascending orchestral vibrancy.

Sebastian Currier's "Microsymph" takes the music another step into sheer orchestral color expression, with lovely clashing timbres and genuine chutzpah. An entire symphony is compressed into just ten minutes and needless to say it is a whirlwind of thematic movement.  The music then segues into mountainous mixes of ecstatics and gravitas, and stands out in the process. This is a work one learns to love, or I have at least. And it is most convincingly performed.

Christopher Rouse's "Supplica" begins somberly, quietly and builds out of that to a very sturdy trunk of expression. It is not typical of Rouse, if there is such a thing, yet it is most eloquent in its moodiness.

And we then have a widely shifting cornucopia in Keinji Bunch's "Aspects of an Elephant," a tonal exegesis of each part of the animal that in the old folk-tale different slightless characters describe as just that one thing, a long tube trunk, a curly tail, etc. Here we get "The Elephant as a snake," "as a whip," etc. The music contrasts each thing with vividly scored depictions.  The lyrical ending sounds rather Copland-esque in good ways, an Appalachian Spring for elephants and their admirers?

All told this is music that fills a space of descriptive contemporaneity, a narrative orchestral world that weaves stories not precisely literal but figuratively spellbinding in their own way. It may well be a real sleeper that I did not notice much until now but then I am very glad to have made its acquaintance. It will not perhaps completely "wow" you nor is it at the edge of the advanced. It is good orchestral music of our contemporary 75-year present and the right now too.

It is nice. It is worth hearing if you wish to know more fully US orchestral music of the present. Bravo!
Posted by Grego Applegate Edwards at 8:55 AM