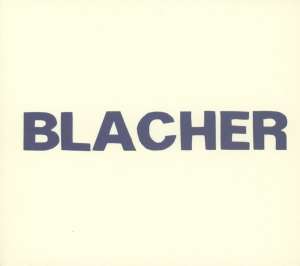 Time and circumstance can do unfortunate things to a composer's reputation. Take Boris Blacher. His music was banned from performance in Germany during the Nazi period and he was anathema, principally because of family Jewishness but also for his supposed "degeneracy," since Hitler condemned anything modern as anti-Reichian and depraved.

In early post WWII Germany Blacher music was celebrated and readily heard. Recordings of his music were issued in Europe and reissued in the States. (I found some of them in my used record hunting days.) He was considered a key voice in the music. Then bit by bit, the Darmstadt School as epitomized by Stockhausen came to the forefront, while Blacher's reputation gradually diminished, until today, when he is virtually forgotten.

Happily, a step toward his deserved revival has been taken in the new box set Blacher (Phil. harmonie 06029), a two-CD or multiple 10" LP set devoted to Blacher's chamber music along with some representative fellow Berliners who fared poorly in the Nazi period yet deserve our approval today, namely Hanns Eisler, Paul Dessau and Kurt Weill. The works span a long period between 1920 and 1975, covering the Weimer, Nazi and post-war years. The performances are stellar, including Boris's wife Gerty Herzog on piano, his son Kolja Blacher on violin and a gathering of others.

This is chamber music of real worth, played with understanding and devotion. The booklet that comes with the set gives us valuable biographical-historical information, sets the scene and makes the case for the revival set in motion here.

Blacher's orchestral music is no less worthy from what I have heard of it, so attention to that part of his oeuvre is now due as well.

Anyone with an interest in and love of classical modernism will find this set very deserving of consideration. It revives for us a stylistic and craftsman-brilliance from those who for the most part have gone out of fashion, but are due for a happy reconsideration. A chamber modernist essential! Highly recommended.