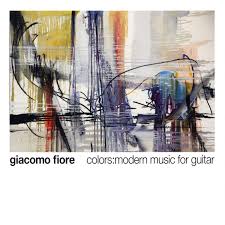 I reviewed Giocomo Fiore's impressive IV: American Electric Guitars LP this past April 11, 2016 on these pages. I am back today with another, his 2011 Colors: Modern Music for Guitar (GFCD 2011).

It is an excellent example of some fine acoustic/classical guitar compositions played with great artistry and logic. Unlike the piano, as I've complained in the past, the guitar does not have all the notes set out for you sequentially from left to right, unless you play on only one string! So the modern, noteful expansion of possibilities perhaps requires more spatial reorientations for the guitarist from the start. The initial getting of all the notes right, expressively as called for, perhaps requires more initial toil, at first, assuming he or she comes to the instrument with a previous accretion of scalular and chordal residues that modern music may partly or wholly abandon. Then of course the challenge is to use your artistry to make the music make sense, in phrasings and colorations, to bring out the essence of the music. (And that is not to say that playing modern music on the piano is easy in itself, but there are different initial demands physically.)

Needless to say Giacomo Fiore is a truly gifted exponent of interpreting modern music for the guitar. So here as examples we have four exceptional works that make their own demands on the artist. Giacomo provides us with interpretations that sound beautifully logical, flowing naturally with the phrasing and artful sort of varied attacks that make of each something special and expressively comprehensible on the highest levels. Colors is an especially apt title for this CD, as we experience a wealth of it thanks to Fiore's performances.

The least traditional modernist-classicist of the four works is, understandably, Lou Harrison's 2002 "Scenes from Nek Chand," which calls for untempered tuning and is played by a special resonator guitar refretted to allow for Harrison's just intonation. It has the Harrison expressive charm of a new world music and gets a fully impeccable and characteristic performance.

The three other works at hand call for the standard classical, nylon stringed guitar and are each in their own way icons of the modern repertoire. Benjamin Britten gives us some unforgettably melodic-modern revisitations of early music implications on "Nocturnal After John Dowland" (1963). It is performed with a dynamic and lyrical thrust I have never heard the equal of, personally.

So too we get some exceptional performance interpretations of Toru Takemitsu's "All in Twilight" (1988) and Michael Tippett's "The Blue Guitar" (1983), both giving us music that challenges the artist to present a coherency out of the many strands of musical figurations each composer juxtaposes.

In the end we get a hugely successful and moving recital from a guitarist of supreme artistry, a totally conversant medium for the music of today and just yesterday. Giacomo Fiore is the real thing! Do not hesitate to find this one, all you who appreciate the guitar extremely well played and the modernist adventurists who seek new some gems played with exceptional facility. Very recommended.