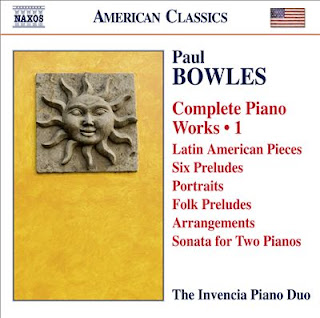 Paul Bowles (1910-1999) was that most rare of humans, an extraordinary creative writer and a composer of real originality. The Sheltering Sky and other works are classics of 20th century literature; his compositions were what he was first known for but have mostly fallen into eclipse until now. His Complete Piano Works I (Naxos 8.559786) should give present-day listeners the chance to hear some of his music, some of his best, as played with sensitivity and care by the Invencia Piano Trio. I believe that those who don't know the music will be in for a very pleasant surprise.

For Bowles' piano music identifies him as a largely tonal, faux naive practitioner, an American Satie with his own straightforward yet very poetic and sometimes impressionistically sophisticated melodic-harmonic approach. We hear ten of his works, plus two very short musical tributes by Leonard Bernstein and Virgil Thompson, respectively.

The music ranges from Latin-American influenced, folksy Americana or otherwise vibrantly lively and/or lyrical character studies and a more formal "Sonata for Two Pianos" that sound refreshingly unpretentious yet disarmingly brilliant. Andrey Kasparov and Oksana Lutsyshyn (the Invencia Trio) play the two-piano works with a togetherness of subtle nuance and then take turns performing the solo works in this volume.

This first volume gives us a rousing sendoff that makes us eager for the second. If you seek a change of pace in your listening, this one will give you a delightful break from heavier fare. It is timeless yet in its own way modern in a sort of guileless, naturalist way. Very much recommended!

Posted by Grego Applegate Edwards at 4:53 AM