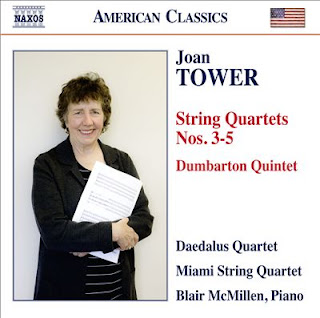 Ludwig van Beethoven in his masterful late string quartets established the configuration as the one for a composer's most inner, profound, deepest musical statements. Others followed and not all of them put so much into their quartets, for indeed, such profundity is not the common lot of even the greatest practitioners, but there have been some, last century being a watermark with Bartok's, Shostakovich's and Carter's quartets attaining their own deep meanings. In the course of this blog I have suggested a few others and now we have the example of Joan Tower, in a new recording that features her String Quartets Nos. 3-5 and the Dumbarton Quintet (Naxos 8.559795), played dedicatedly and variously by the Daedalus Quartet and the Miami String Quartet, with pianist Blair McMillen joining in on the Quintet.

These are very serious works, filled with struggle and strife, but also transcendence and perhaps the elation of pure attainment. "Angels (String Quartet No. 4)" is especially moving, with its chromatic drama, its intense articulation of rapid figurations alternating with music of resolve. The tension and resolution are not a matter of tonality as much as contrasts of concentration versus open planes of relative repose.

But we can hear a sounding of inner depths  in "White Water (String Quartet No. 5)" and "Incandescent (String Quartet No. 3)" as well. All three are from the current century, No. 5 from 2012, No. 3 from 2003 and No. 4 from 2008, and they have the melodic and harmonic density of classic modernism, yet also a kind of looking back over time that in their way make them post-today, timeless in their direct grappling with the turbulence of history, if you will, and the need to come to grips with the meanings that remain to be uncovered, to be stated obliquely in musical terms.

The "Dumbarton Quintet" (2003) is no less serious and masterful, with the addition of the piano giving Ms. Tower a second, contrasting sound dialogue partner who both intermingles with the strings but then at times breaks free to engage in meta-commentary, complimentary additions and answers to the string's fervent questions, so to speak.

All of this is music of great strength, depth and seriousness. The performers give their considerable all and the results are extraordinarily moving. The quartets and quintet occupy a special place in the chamber music of our new century thus far. They are triumphant in attaining that inner place reserved for our greatest composers in those moments when they attain a supreme focus of expression.

Joan Tower is a voice of our time who manages here to give us works doubtless deserving of lasting appreciation over the times ahead. For now, though, we can savor these works as a living part of our present-day triumphs, a monumental yet inner-directed connection with our best, most transcendent selves.

Grab this release by all means!
Posted by Grego Applegate Edwards at 5:12 AM