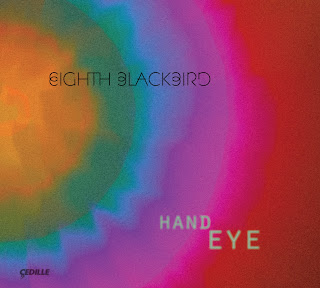 From the award-winning world-class contemporary chamber ensemble Eighth Blackbird comes their latest recording, Hand Eye (Cedille 90000 162), a riveting collection of eight short to fairly short compositions by the composer's collective Sleeping Giant. Like Mussorgsky's Pictures at an Exhibition, it is music directly inspired by a contemporary visual art collection, in this case works contained in the Maxine and Stuart Frankel Foundation for Art. Each composer chose a particular work as the catalyst for his/her piece.

The music runs together nicely as a continuous whole, as movement within a larger totality. And so we get Timo Andres' "Checkered Shade," based on a pen-and-ink abstraction by Astrid Bowlby; Andrew Norman's "Mine, Mime, Meme," inspired by rAndom International's installation "Audience;" Robert Honstein's "Conduit," engaging with a digital interactive sculpture by Zigelbaum and Coelho; Christopher Cerrone's "South Catalina" takes inspiration from rAndom International's interactive "Swarm," while also capturing the composer's reaction to the intense brightness of the sun during Southern California's winters after experiencing the more dreary East Coast variants; then there is Ted Hearne's "By-By Huey," an interpretation of Robert Arneson's painting "Bye-Bye Huey P." depicting Huey Newton's murderer Tyrone Robinson; and finally Jacob Cooper's "Cast," which is informed by and forms an analogue equivalent to Leonardo Drew's paper casts of everyday objects.

The ultimate effect is of something seminal, a romp through a series of many faceted works iconically post-modern, elementally, radically tonal at times, always filled with vivid tone-color painting, distinctive parts of an ultra-contemporary whole.

Nothing sounds derivative, nothing settles into minimalist orthodoxy, but instead ever sets about creating novel and musically rich dwellings for us to inhabit for a short while, only to move on to the next. It is music most originally conceived by Sleeping Giant and superbly performed by Eighth Blackbird.

If someone were to ask me, "what does the latest contemporary classical modern music sound like?" I would likely put this on for them for starters. It is a most wonderful synthesis of convergent trends in new music today, one of a handful of iconic examples of where we may be headed in the musical future.

Needless to say I would strongly recommend this one to you if you want to keep abreast of what's good about the newest of the new.
Posted by Grego Applegate Edwards at 5:20 AM