Dalmatica, Chants of the Adriatic 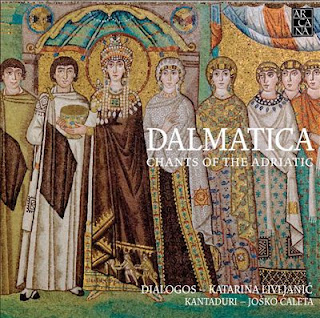 The Croatian coastal region of Dalmatica has a history of various  global influences ebbing and flowing with periodic war and strife. In the end it left the region with a rich musical treasure trove of medieval liturgical music that incorporates in local ways both Catholic and Byzantine music strands.

The four female singers of Dialogos under Katarina Livljanic and the group of male traditional Croatian cantors, Kantaduri, under Josko Caleta, join forces for a fascinating journey into rare Latin manuscripts, oral tradition and the polyphonic Glagolithic chants of the area. They cover by disparate examples the holy season spanning the time of Advent through to Holy Week. All this on the splendid album Dalmatica, From Oral to Written Transmission: Chants of the Adriatic (Arcana 395).

The collection is endlessly absorbing, indeed at times showing an original fusing of East and West and a medieval-and-beyond primality. There is plenty of polyphony, monodic plainchant, archaic harmonizations and a strong Byzantine influence.

There is a wealth of examples that are inimitable, unexpected, and quite beautiful in the hands of the talented and mellifluous singers. This is something special, experienced in the hearing much more so than in the telling.

I will thus leave off attempting to describe in detail the many musical ins-and-outs to be heard. Instead I will heartily recommend you listen closely and repeatedly to this offering. It is most assuredly a different confluence of early music liturgical possibilities, excellently presented.