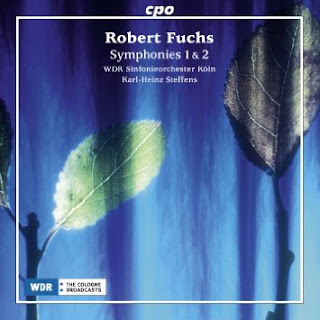 What we know of only in later life could fill many books. Some of it is the product of the times, or the life cycle, and other things are a matter of serendipity.  My knowledge of the music of Robert Fuchs (1847-1927), the Austrian composer and educator, begins with the CD at hand, and that release is symptomatic of the times and also a certain amount of serendipity. In his lifetime he was rather well known, but nowadays that is not very much so. The indefatigable activities of musicologists and performers of the present day have to do with the revival of more obscure figures, and that I happened upon this volume, Fuch's Symphonies 1 & 2 (WDR CPO 777 830-2) is also somewhat serendipitous. I choose to review it because I did NOT know the music. The WDR chose to perform and record these works because they wished to create new appreciation of the composer today. And that's all a good thing.

After a couple of student symphonies his official "Symphony No. 1" was premiered by Hans Richter conducting the Vienna Philharmonic in 1884. Reactions were somewhat mixed, but it was honored by the Beethoven Prize committee that included Brahms and Richter with the award and 500 gulden. Some three years later Fuchs finished his Second Symphony and it was a resounding success.

Looking back now we hear an "early late romantic" in budding form, with something of the endless melodic sprawl of Schubert and perhaps Bruckner, though I see no evidence of a personal knowledge of the latter in the liners, and yes something of Brahms, Schumann and Mendelssohn (the latter for the scherzo-ish aspects).

Both symphonies are dynamic and very well thought-out. The orchestrations are well conceived and something rather Brahmsian.

If you listen without specific expectations you do hear something of the larger structures of the Viennese Mahler, though of course you might also say that of Schubert's "Great Symphony." Nonetheless there is a certain pull forward in this music.

Do not expect much in the way of the modernism to come. Ignore all of that and you have a symphonist with something to say and the full means to say it. The WDR Sinfornieorchester Koln under Karl-Heinz Steffens bring us nicely vivid readings, with plenty of nuance and detailed articulations to give us the Fuchs compositional outlook of his early period in full light.

It has much to recommend it and fills out our knowledge of the Viennese scene in those heady days.
Posted by Grego Applegate Edwards at 5:15 AM