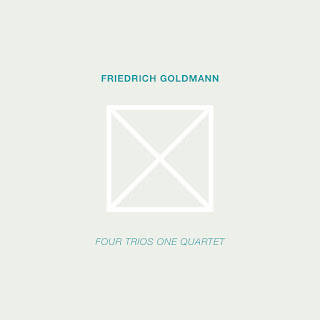 Composer Friedrich Goldmann would have celebrated his 75th birthday last month. The Darmstadt-Stockhausen student (1959) amassed a large body of works hailed in East Germany and eventually throughout Europe and was, among many other things, a conductor of Stockhausen's Gruppen on the original celebrated DGG recording.

His music has undergone a major revival since 2009, with the entire remainder of his previously unperformed chamber and orchestral works enjoying public premieres among other things. The current release, a single CD in a lavish box presentation complete with a 48-page booklet, Four Trios One Quartet (Macro SWR2 M46) gives us his complete trios of 1986-2004 and his "Oboe Quartet" from 2000. Two of the recordings were supervised by Goldmann himself before his death; all involve musicians with intimate experience of the composer's music, including Ingo Goritzki (oboe), Bjorn Lehmann (piano) and members of Ensemble Mosaik and the KNM Ensemble.

In the end one is treated to some beautiful performances of some exceptional Goldmann works, with a high-modern rigor and purity of means, yet an open creative stance that does not show either rigidity or formulaic calcification--but rather a composer at the imaginative peak of his inventive powers.

I somehow have missed Goldmann's music--no doubt because during his tenure in East Germany not so many composers were readily heard from there in the States, either on recordings or otherwise. It turns out it was my loss as this music has very much to recommend it and in such dedicated performances as these one hears the singular voice of the composer in ideal terms.

And so I in turn do not hesitate to recommend this volume to you, my confirmed modernist readers! This is music on a high plane that even a newcomer to classic modernism might appreciate, given a little effort. So, take the plunge.

A triumph of dedication on the part of the performers, and of high creative achievement on the part of Maestro Goldmann. Bravo!
Posted by Grego Applegate Edwards at 5:19 AM