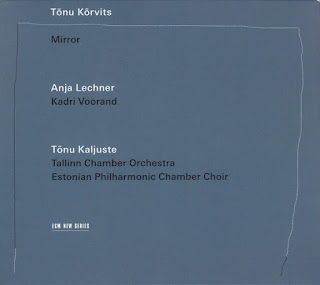 Is there an orchestral-choral school active these days that one might call "ambient"? Surely. Probably its most celebrated member is Arvo Part. The roots of such things go back to liturgical music in the Church--in Gregorian and Byzantine Chant and what developed out of it. We have a fellow Estonian today who with Part most certainly fits in with the ambient mode. He excels at it in his own way as heard in the new release of his music, Mirror (ECM New Series 2327).

We are treated to six of Korvits' works, all of which give us some remarkably resonant music in the hands of the Tallinn Chamber Orchestra and the Estonian Philharmonic Chamber Choir under the direction of Tonu Kaljuste, with solo appearances by Anja Lechner on cello, Kadri Voorand, voice, and the composer on kannel, a stringed zither-like instrument.

The music as a whole, notes Paul Griffith in the liners, has much to do with Korvits' own channeling of the Estonian choral tradition, especially as practiced by his predecessor Veljo Tormis. Be that as it may we who are on the outside of that tradition get some remarkably open, spacious, cavernous strains in which the sound of the hall plays an important part in framing the sounds themselves (something of course that all cathedral-centered music shares in various ways--with Korvits it would seem to be essential to the presentation of his vision).

The six pieces by Korvits take advantage of space and sound in organically moving ways. Anja Lechner's cello acts as a kind of reflector, a commentator of sorts when she is called for, in the opening work "Reflections from a Plainland" (2013) for cello and choir, a fantasy on a song by Veljo Tormis and Paul-Eerik Rumo. The final work "Lau" (2012-13)  makes beautiful use of Lechner as the soloist rising above the strings. And "Seven Dreams of Seven Birds" (2009/rev 2012) is perhaps the most stunning of all, evoking uncanny passages for cello, choir and strings with a very ethereal result.

The second work, "Labyrinth" (2010),  is a seven-part suite for strings. It gives us the purely instrumental aspects of Korvits in very pleasing ways.

In all the program has a good deal of contrast, variety, beauty and a very imaginative approach to the possibilities of ambience.

I found the music grew within the listening me as I listened repeatedly over time. As I began catching the inner details on the music on later listens the whole of the Korvits way blossomed out in ever more luxurious bloom. This is music that has an otherworldly presence for even a casual listen, but reveals its structural form and musical worth increasingly as one listens.

I do not hesitate to recommend this album to anyone seeking the possibilities of renewal outside of one's customary musical habits. Korvits is an original and an extraordinarily interesting one at that.