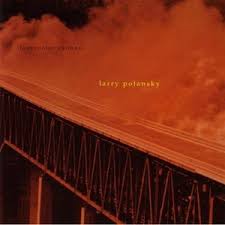 Today I catch up with a Cold Blue release from several years ago (CB0011) that retains my interest and shows no sign of aging. It is a disk by composer Larry Polansky called Four-Voice Canons. The album  features performances by various personages, some of them taking the form of collaborations, others functioning more in the composer vs. performer realm. All are canons by virtue of having counterpoint from four distinct voices, whether that be human voices talking, reciting or singing, natural and electronically altered sounds and/or conventional instruments. There is an imitative element oftimes, sometimes in ways not readily clear at first, others more overt. Still others have more pointillistic entries and exits by the various voices so that the canon idea is expanded into less traditionally classic interactive ways.

Each of the 15 examples included here is unique in itself. The range of sound sources and corresponding  atmospherics can vary widely. So we get solo marimba, a gamelan instrument, fretless electric guitar, the voice-patter of a child or a group of adolescents saying specific words to form a contrapuntal tapestry via electronic alteration, a chamber choral number by New York Voices,  and so forth.

Some utilize noise or unpitched sounds, others are in a sort of radical tonality mode, still others utilize extra-diatonic tones. All are situated within a spectrum of a postmodern-meets-classical-modernist diversity.

There is much that piques your ears via sheer inventive imagination. Many of the canons grow in stature as you listen repeatedly. Some form interludic segmentation as a part of the whole, and perhaps have something less than iconic interest in themselves after many hearings.

Polansky and his collaborators/participants manage to redefine how we think of canonical form and in the process give us a lively potpourri of brief pieces that encapsule a diverse array of possibilities and keep the ears interested.

It may not be a landmark offering of the new century but it grabs you and sends you over a vast terrain of sound landscapes with a consistently imaginative approach. It is at all times an interesting and provocative listen.