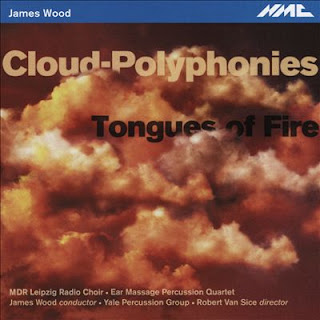 So, James Wood? Yes. A very much living composer who gives us his compositions Cloud-Polyphonies and Tongues of Fire in a recent recording (NMC Recordings D223). Judging from the provenance of  the NMC label he is British born, and so the liner biography all but affirms. He began his career as conductor of the Schola Cantorum of Oxford, then founded the New London Chamber Choir whose new music affiliations began under his directorship.  1982 to 1984 found him as director of percussion studies in the Internationale Ferienkurse in Darmstadt. He founded the Center for Microtonal Music and its ensemble Critical Band in the 1990s. In 2007 he migrated permanently to Germany where he composes and conducts on a freelance basis.

The two works have dramatic clout.

"Tongues of Fire" features the MDR Leipzig Radio Choir and the Ear Massage Percussion Quartet under the composer's tutelage for some primal choral music that has the kind of pre-AD feel of later Carl Orff, a ritualized, quasi-primitive dynamic that goes its own way with considerable impact.

"Cloud-Polyphonies" gets intensive and effective treatment by the Yale Percussion Group under Robert Van Sice. It lives up to its name with masses of mallet instruments in varying combinations creating ambient clusters of non-periodic, sensual swarms of sound. Piano and non-pitched percussion have contrasting moments with their own cloud formations. The drumming aspect of the ensemble emerges nicely with some bracing pulsations. This is vibrant, vital music that reminds us of the legacy of Xenakis in thinking of percussion ensembles as sound color densities and timbral tapestries. Yet there is much Wood originality to discern in this work. He has a personal approach and a notable dedication to artfully designed masses of sounds. The piece is landmark for its long-form excitement and mood matrices.

Anyone with a sense of modern new music adventure will no doubt respond to this compendium of Wood works. It is gratifying and stimulating fare, performed with a dramatic sense of detail sculpting. Here is a vital new music figure well worth hearing.
Posted by Grego Applegate Edwards at 5:28 AM