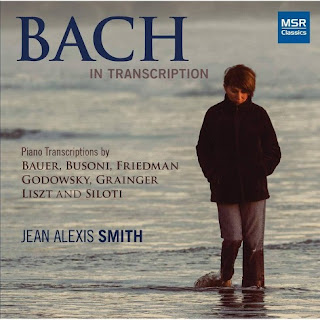 The phenomena of the Bach transcription for piano rose up brightly and prominently in the 1800s with Liszt and has been a factor, a happy thing ever since. Now pianist Jean Alexis Smith brings to us some of the most worthy of such endeavors on Bach in Transcription (MSR Classics 1720). That Bach himself was an avid transcriber reminds us that the practice goes far back, but the Bach craze in many ways started in the late classical-early romantic era and hence we gauge from there.

There are all kinds of goodies on this collection, and it is a definite plus to have all ten works as played quite respectfully well by Ms. Smith. We get Busoni's celebrated transcription of "Toccata in C Major," Ignaz Friedman's "My Heart Ever Faithful," Harold Bauer's "The Soul Rests in Jesus' Hands," Busoni's "Adagio in A minor," Liszt's "Prelude and Fugue in A minor," Alexander Siloti's "Prelude in B minor,"   Leopold Godowsky's "Adagio in C Major,"  Busoni's "I Call Unto Thee Oh Lord,"  and finally Grainger's "Blithe Bells (Sheep May Safely Graze)."

The effect of so much "additional" piano Bach is like a surprise present on a day when you did not expect anything. There is much that will be familiar no doubt, some less so, but all extraordinary to hear on piano played with care and concern. The heroic piano idea of the 19th century and beyond lives in these transcriptions, not all of which are verbatim and all take the wonders of the grand piano in hand to bring out a later-day addition to the Master's already brilliant doings. All the better in that we do not lose the original in the process, surely.

I recommend this for all piano fans and all who want more Bach, nicely redone at the dawn of Modernity. Kudos! Happy me.

Posted by Grego Applegate Edwards at 4:36 AM