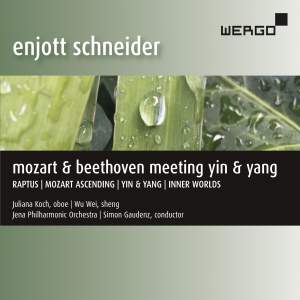 Lukas Foss did us all a favor when he created his "Baroque Variations," when he orchestrated and re-orchestrated as well as re-situated some well known Baroque themes and made of them something super-High-Modern. In that "tradition" we now have Enjott Schneider and his Mozart & Beethoven Meeting Yin & Yang (Wergo 5125 2). Two of the four works here use source materials from either Mozart or Beethoven and fashion out of them something altogether Contemporary, Modern, other--and nicely so.

Schneider goes his own way. "Raptus. Die Freiheit des Beethoven" sews together lots of familiar passages (like the lower string intro to the final movement of Beethoven's 9th, etc.). What he does with them all shows his high level of invention and in the process frankly rather thoroughly tickles me. It is great fun. If you like this then do not forget also Kagel's "Ludwig Van," Cage's "HPSCHD" and no doubt others. Anyone?

"Mozart Ascending" takes what we have of Wolfgang's unfinished Oboe Concerto KV293 and makes of it varying degrees of otherness, from mostly as written to thematically cognizant but totally rethought.

All this music is rather inimitably brilliant and then to cap it off we have two more works that take a different turn but no less effectively.

"Yin & Yang" features the astounding artistry of Wu Wei on the sheng in a concerted work for the instrument and orchestra. Understandably Chinese and Asian sorts of motives weave in and out of the music and yet too we have intersections with Modernism so it fits in with what we heard previously and also captivates in itself.

The final "Inner Worlds" for orchestra brings us thorough-goingly original music not tied to anything per se but the composer's muse, though it does fit in with the composer's idea of this program as a portrait of the Jena Philharmonic.

And if in the end we gain another view thereby, so all the better. It is a work of poetic mystery and lets us know that the orchestral tradition lives on today. It shows off Jena's various sections nicely in the process (as does the entire album). And too we are situated musically in a somewhat advanced harmonic realm at times so we feel through Schneider's music ultimately that he belongs to our time surely and is no museum piece, though there is rhapsodic lyricism and grandeur to it that points to the recent past without imitating it. This one ends up rather exciting at that, with tom toms and orchestral flourishes pouring forth in memorable ways, and then a rather noble horn choir passage. Bravo.

Well there we have it. I am enjoying this music and no doubt will continue to do so for quite some time. I recommend it for those with a sense of Modern adventure--it is fun and rewarding!.