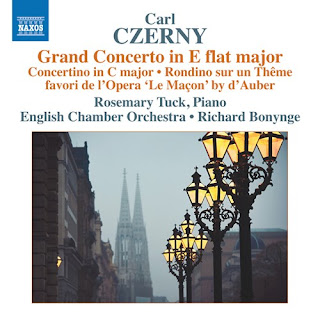 Rosemary Tuck at the piano along with the English Chamber Orchestra under Richard Bonynge turn in stellar performances and quell any unease one might feel about so much Czerny coming out of late--because this is in fact worthy music, very well played.

The "Second Grand Sonata" puts you in mind of Beethoven, at first his "Pastoral" and then perhaps aspects of the "Eroica." Either way this music extends outward from such considerations and gives Czerny his own take on the then "New Music" of his day.

All three works overtly sparkle though the "Second Grand Concerto" is the most lengthy and ambitious.  Pianist Tuck in the liners speaks of the double role that Czerny played in the Vienna of his day--as a purveyor-Czar of fashionable works that concert going audiences could appreciate but then also a pianist uniquely situated to have a strong hand in the continuing developments in pianoforte technique. You can hear both surely in these recordings which rather amazingly mark the World Premiere of the works in recorded form.

Yet for all the above the music does not sound patronizing or pandering to popularity. Instead we get a steady torrent of delightful sounds as so nicely realized here.

If there is virtually nothing the least melancholic, there is much that is an overflowing, of a positive jolt of celebratory Vienna at the time musically and we can of course turn to later Beethoven quartets, etc. for when we seek more brooding depth. All works cannot be all things. So if we accept what Czerny was not, we can enjoy it all to the max when in the mood for it. And it is true that the minor key section intro to the Auber theme in the "Rondino" points to the possibility of depth charges though one instead dreamily gets pummeled nicely once again by happy melodic fare.

And so I do recommend this one to you. It gives you a genuine dose of Czerny in an abundance of performative joy. If it drives you back to Beethoven's concertos, all the better. There's room for both in the end and then perhaps Brahms relieves you of both with yet another take on things of course. So be it! So things go.

Posted by Grego Applegate Edwards at 4:30 AM