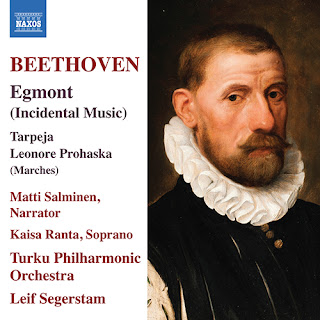 Most Beethoven fans will know the Overture from Egmont and probably the Funeral March from Lenore. Today's CD goes a good deal further with those, plus the complete Egmont (Incidental Music) (Naxos 8.573956), along with some other select theater incidentals and Six Minuets. Leif Segerstam conducts the Turku Philharmonic Orchestra for balanced, tempered, yet very alive readings more Apollonion perhaps than frenetically Dionysian, but that is quite a good thing if your mood is the same.

The complete incidental music from Egmont turns out to be quite compelling. It comprises nearly 50 minutes all told (including a minute or so of narrative in German). The numbers that include soprano Kaisa Ranta are fine to hear, as are the purely instrumental passages, so very Beethovenian one is never much in doubt as to the personal stamp of brilliance in full flower. He penned this after having written his Pastoral Sixth Symphony, in the following years, 1809-10, so he was completely himself of course by then, as his absolutely deftly heroic handling of the orchestra reminds us along with the depth of the noting itself.

It is some marvelous music. By the same token the Introduction to Act II and the Funeral March from Lenore, the Triumphal March from Tarpeja and the Six Minuets (1796) (the latter of which refresh via a touch of Beethoven the Classicist) fill out the program with very worthwhile fare, done to a turn I suppose you could say.

Those Beethoven lovers in the mood for things less familiar will appreciate this one as I have, and then of course there is the Naxos price to encourage you. Nice performances so there is a good deal all around. Kudos!

Posted by Grego Applegate Edwards at 3:47 AM