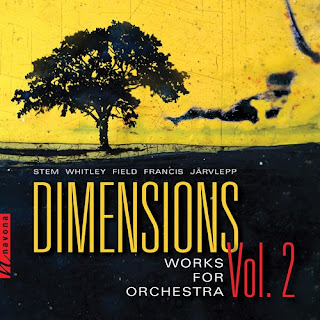 New Music continues to flourish. Today, a new volume of an anthology of up-to-the-minute Modern orchestra music entitled Dimensions, Works for Orchestra, Vol. 2 (Navona 6251). The music all has some definite excitement rhythmically and a kind of rootedness in one way or another that gives us Modernity but also a kind of music of place, a locality if you will.

The performances are very good and recording quality fine. So  we can hear and appreciate some interesting music that excites by an anything-goes eclecticism as much as originality combined with stylistic largesse, all in a memorably tonal realm.

So we hear the fine drumming inherent in Eric Stem's "Portland," the almost Indonesian stepped meters and layering of Whitley's "Bonzai Down," a sort of pastoral Barber Knoxvilleness set against martial rhythms of Field's Whitman lyric-ed "A Letter from Camp," the rich lyricism and polyrhythmic aspects of Francis' "Concerto #2 for Guitar and Orchestra 'In Somnis Veritas'" and a Latin rhythmic cha-cha feel with Jarvlepp's "Street Music."

It is music that stays with you, that impresses with its together quality and melodic-orchestrational-rhythmic heft. Strongly recommended for all modernists.looking for rhythmic spice.