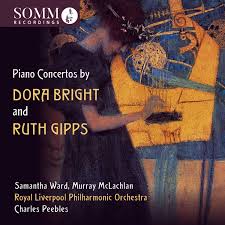 The performances of pianists Samantha Ward (for Bright) and Murray McLachlan (for Gipps) plus the Royal Liverpool Philharmonic Orchestra under Charles Peebles leave nothing to be desired. They are fine in detail and in the performative whole. There is both tenderness and spirit as needed.

Bright's peak formative period (according to the liners) was in the 1880s, Gipps' in the 1940s, so of course they belong to different eras, and so too the post-Brahmsian Englishness of Bright and the expressive clarity of Gipps tie in important ways to the periods in which they lived.

Bight's inventive line-weaving ability is apparent in the "Piano Concerto No. 1" and the "Variations for Piano and Orchestra," which make their recording debut on this CD. They have a flair and stay in the mind as worthwhile. The Variations have depth, the Concerto has heart.

Gipps' "Piano Concerto in G minor" has gravitas and an almost English-Rachmaninovian weightiness.in the first movement, then a puckish sprightliness and a touching lyricism that charms most certainly. The piano parts can be ravishing at times, happily. Her short orchestral "Ambarvalia" is a fittingly songful end to a fascinating program.

A nice surprise, this. Modern it is not, any of it, not exactly, not typically though Gipps sometimes sounds a bit adventuresome, stepping away from a strict Romanticism into an Impressionism of an individual sort, and there is a nice local quality to the outlook in both cases. Hear it and experience some new voices among women historically. Both were talented.

Posted by Grego Applegate Edwards at 7:02 AM