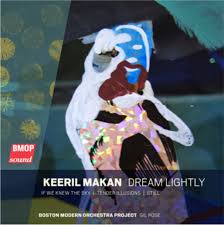 Keeril Makam writes orchestral music which is sufficiently sonically attuned that you are drawn into his world immediately and you remain there for the duration. The Boston Modern Orchestra Project gives us an anthology of four relevant works on the recent Dream Lightly (BMOP Sound 1066). They cover our new century (2006-2014) and they do it with highly dynamic and memorable essays in sound color and post-Minimal-oriented originality. In the composer's words, the music seeks to "contextualize silence." One could say in that endeavor there lies the music's stand-apart quality.

Repetition where encountered is on a macro- more than a micro-level. Things do come around generally speaking but there are much longer sequences, more of a stillness and less predictability in the overall scheme of things than one is inclined to hear in classic Minimalism. The works have ritual cohesion more than interlocking profusion. And they sprawl into a linear cosmos that does not obviously repeat as much as it hovers in a special zone. The ambiance of it is as pronounced as it is rather profound.

Maestro Makan is a professor of composition at MIT as well as recipient of the Rome Prize and the Guggenheim Fellowship.

"If We Knew the Sky" (2014) rolls by at the longest duration (25 minutes) of the four. A vibes motif opens the window on color and presence, long mysterious returns and ambient sonances that will be out front throughout. The penultimate section takes the motor rhythmic implications of the opening vibraphone line and rockets forward with a lively riffing. Stillness returns in the end.

"Tender Illusions" (2010) like the title work stretches out of the Minimalist mold to favor a magnetic sort of hovering that one feels the depth of on hearing.

"Still" (2006) favors a long open kind of hovering as well, with ambient sound structures that move slowly through the hearing self like high clouds on an otherwise sunny day with a slight wind to drive things onward without hurry. Violinist Charles Dimmick and violist Peter Sulski handle the solo slots quite well and in the end Makan convinces us that his musical worlds are populated with inventive brilliances. Bravo.

This is music very much of today--Modern in the widest sense of sharing the zeitgeist of "newness" and a progressive sort of timefulness we come to expect from our contemporary masters. This is prime New Music well performed. Strongly recommended.